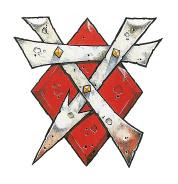 After the mauling I got in game one of the league, my team for the second game was as follows:

11 Players (including Journeymen), No gained skills, and Team Value 940

I was playing a Lizardmen team that also hadn't got any skills in their first match. They consisted of:

Main tactic was to hit the skinks as often as possible, hoping to even up the numbers, and score as often as possible to stop the saurus turning the game into a mid pitch brawl. However without facing mighty blow my rats hopefully wouldn't die so easily.

For my inducement I was tempted to spend 20k of my treasury to buy the 80k ball and chain star player, but eventually decided that it was better to save all the money I had to hopefully buy back the gutter runner that died in the first game, so I picked the inducement that gave me +1 to my knock out recovery rolls.

I can't remember who won the toss, but I was receiving. The lizardmen set up an aggressive set-up, 5 saurus on the line of scrimage (LOS), with most of the skinks behind and on the wings 3-4 squares back from the LOS.

I set-up the rat ogre for a first turn crowd push on the skink nearest the sideline. I weighted the side with the rat ogre with my stormvermin, and a gutter runner (one square away from the wide zone). The other gutter runner (who was on 5 star player pts) stayed back to collect the ball. His only goal was to get a completion and survive the match !! Journeyrats on the LOS with one other linerat joining them. The rest of the linerats spread out to make sure there was no gap to get through without dodge rolls.

Weather was fine, kick-off table gave us both a 4th reroll, and the ball stayed on the pitch, moving slightly towards the flank that I had weighted.

I started with the crowd push, but the rat ogre stood and roared rather than blitzing. I really wanted to get the crowd push to reduce the lizardmen numbers (at least for this drive), so I attempted a reroll, which of course I failed the 4+ roll to use the reroll; stupid rat ogre !!

Linerats moved up to give the linerat on the LOS enough assists to knock over the saurus nearest the flank I had weighted. Finally I tried to pick up the ball with the gutter runner, who promptly fluffed the pick-up on 2+. Not a good start to the drive :)

The Lizardmen responded by rushing through my tactle zones with skinks to leave 3 skinks only a few squares from the ball (lucky the ball hadn't scattered forwards on the kick-off or the fast skinks would have been able to reach it). The saurus did want they should and flattened my front line, put a tactic zone on my stormvermin and stunned the gutter runner up the field.

A very nervous turn followed for the skaven, one wrong move and it was likely to be a fast skink touchdown.

With the saurus all in tackle zones they could only get skinks back to threaten the ball carrier. The saurus showed the linerats the error of their ways, and flattened most of them, but luckily no injuries yet.

With only skinks threatening the ball carrier's guards. The skaven took revenge on the skinks with the storm vermin flattening one and moving down the field. A semi cage was put round the ball carrier close to the end zone. Even the rat ogre managed to move up the field.

Another turn of hits by the saurus still didn't produce any injuries, the gutter runner who did the completion was knocked down by a saurus, and the skinks finished the job by fouling him into the knocked out box (I think he feigned the knock-out just so he could get off the pitch, as any skaven who weren't near the lizardmen end zone were being unmercilessly hunted down by saurus).

A few quick blocks on skinks, which badly hurt another, and the stormvermin strolled into the end zone. I would have liked to stall a bit more, but my players remaining near the LOS were taking a battering, including the last gutter runner on the field.

The +1 modifer on knock-out recovery allowed the knocked out gutter runner to return for the second drive.

The saurus set up very aggressively for the second drive. All the saurus were on the LOS, with most of the skinks 2 squares back on a group.

The skaven set-up for a fast counter attack, I needed a second td to secure the match or I could be facing the dreaded hitting team 2-1 grind*

The skaven set-up was 3 linerats on the LOS, a gutter runner each flank supported by a linerat, and the storm vermin and rat ogre a few squares behind the LOS one on each side.

One saurus was heard cursing nuffle, as the two sides starting setting up, and demanded the saurus were allowed to teach these rodents a lesson in pain. Before the lizardmen player coach could say “wait until I've got the ball” the saurus started the hitting. As the hitting began the ball sailed far into the back corner of the lizardmen half, and scattered one square towards the LOS.

The first saurus attempted to smack the first linerat, and almost stumbled, but a bit of team training (reroll) helped him avoid this and he pushed the linerat back. Up next the middle saurus attempted to hit a linerat, a skaven fan from the sidelines taking advantage of the sunny lustrian day, held up a shiny gem reflecting the sun's light into the saurus' eye. Blinded the saurus lunged forwards to where the linerat was, however the linerat quicky dodged aside and bought up his spiked shoulder guard which tore into saurus chest, blood spurting everywhere.

Before the skink medical staff had even got on the field to stretcher off the badly hurt saurus, the skaven were off dashing down the field the 2 gutter runners went after the ball, one pushing himself to the limit that only some team sprint training stopped him from falling over (reroll on failed Go Fot It). With the skinks bunched in the middle, the rat ogre blitzed the skink nearest the ball, then stood next to three others. The storm vermin also moved to the skinks. Linerats put tackle zones on the saurus, and the rest surrounded the skinks just behind the LOS.

Over the next couple of turns, a skink who went after the ball was unmercifully taken out by gutter runners and the ball was made safe near the lizardmen end zone. Linerats continued to stay next to saurus and take hits, which allowed the stormvermin, rat ogre and remaining linerats to pick on the skinks. The rat ogre and stormvermin particularly having fun. The skaven scored the second touchdown in turn 8.

At half time with 4 players out for the rest of the match, including a saurus, the lizardmen coach threw in the towel. I tried to persuade my opponent to continue, as he's only lost a skink permanently, and he'd got some SPPs over his first two games, but he insisted that he's got the starting team set-up wrong (which I disagreed with), and that he would restart.

So although a gutter runner was one touchdown away from getting a skill, at least the team had come threw unscathed. Plus getting the opponents MVP and winnings would help with team building. I got 100k winnings in total, which when added to my existing treasury allowed me to buy back the gutter runner, and buy one of the journeymen I was using (as he received an MVP). I would have liked to buy the other journeymen as well as he was the one that took out the saurus and got 2 SPPs, but I thought getting a third gutter runner was more important.


So after two games and two wins, my team is now:

2 Storm Vermin (One with Guard, One with -1 Movement)

3 Gutter Runners (One with Block)


With the rat ogre needing another casualty for a skill, the unskilled stormvermin and a gutter runner needing 1 SPP to get a skill, and the last gutter runner needing one touchdown for skill, the team is looking good. I just need one more nice game to get a few more skills and afford an apothecary. If one of the linerats could get a skill to give me the kick skill I'll have a team that can really have a chance of doing well.


Until next time, may your opponent only roll skulls.

* The 2-1 grind is a classic tactic for hitting teams against agile team. Let them receive, pressure them (ie. Beat up their team) so they score early. Then form a solid cage moving down the field causing as much pain (and hopefully casualties) as possible, and score in turn 8. For the second half form a good cage again, and repeat the process of slowing marching down the field and score in turn 8 again for a 2-1 win.