So it's only 2 months since the LVO, and another one of the large US tournaments has come round, this time Adepticon.  Adepticon has different comp to the LVO, in that it basically doesn't have any, so you can unleash unrestricted D, unrestricted Invisibility and as many detachments as you want.  I was interested to see if two things had happened:

What intrigued me to do another analysis was two comments that I read/heard in passing about the event.  One was while watching Reece Robbins (of Frontline Gaming who run the LVO) explaining that his list for LVO was not good against Tau because he was not expecting there to be many Tau at the event because of the format.  Now I now Tau don't have psykers so can't have or fight against full Invisibility too well, plus their D weapons are limited on 4 one shot weapons that need markerlights to be D on one model in the Tau range, but they are still a good army.

The second comment game from the Blood of Kittens review of the event. here, where they said:
"If you take a look at the lists you will notice one army dominated over the rest: Eldar. Eldar have seven spots in the Top 18 and a few more Eldar shoehorned into other lists! All the Eldar lists had at least one Wraithknight and Scatbike units. Adepticon has full powered D Weapons, so with Eldar having the easiest access this wasn’t a surprise. Still, this is amazingly dominate army, the only other time I can remember an army performing so well was the Grey Knights  at the end of 5th edition. What is impressive are Eldar don’t have any way to get free upgrades or units, they don’t seem to need it. Unless future army rules find a way to easily kill Warp Spiders and Scatbikes I don’t expect Eldar domination to end anytime soon" - now Eldar were already dominate at LVO, but this sounded like they did even better, so was this an exageration or did Eldar really improve in their performance, I thought that with more time people would get better at fighting Eldar, so while good players would still very well with the army they wouldn't dominate as much as they had.

Also Blood of Kittens hosts, here, all the top 18 lists if you want to look at the actual lists of the top players.

Ok, so on to the number crunching to see what happened (but before we do I refer you to my last article, here, where I included some of the limitations of any number crunching):

For this analysis I'm only going to look at armies which had 7 or more entries.  I would normally have cut off at a higher number, but I wanted to include Necrons in the analysis.  Just missing the cut were Dark Eldar and Khorne Daemonkin at 6 players each.

Eldar in this tournament have surpassed Vanilla marines as the top army, however when you add in marines in all their varieties Marines are still the most popular, however for nearly 1 in 4 armies to be Eldar is a huge number for them (and a massice jump from the LVO where they were 1 in 7 of the armies).  It also shows that the numbers per army start to drop off very fast.  After Tau, Space Wolves & Daemons you're down to under 10 entrants.

So how did the armies perform ?  Again I would look at average placings, but then also compare the number of placings in the top 50 and top 30, and compare that to how many players for each army there were:
Although they are small samples, Dark Angels and Daemons came top, followed by what I think are the top 4 armies at the moment, Eldar, Marines, Necrons & Tau.  However the average placing for Eldar is significantly lower than the rest, and this born out when we look at comparing the portion of armies in the top 50 or 30 compared to the full list, eg. Eldar made up 23% of their field, but 42% of the top 50 players.  A killer stat is that apart from Dark Angels and Daemons which had a small number of entrants the only army to have an average placing in the top half was Eldar, the nearest to them, Marines, having an average placing 30 places down just below the mid point.

However is this better than Eldar did before ?  Due to the small size of Adepticon, the top 50 at LVO is comparable to the top 30 at Adepticon.  Looking at the top 30 at Adepticon Eldar were 1.57 more represented than they were in the general field, compared to looking at the top 50 at LVO Eldar were 1.55 more represented than the general field.

One thing that has changed is the spread of the armies performance, particularly Eldar:

The performance spread is much closer between the armies.  This stat shows how spread out the results of the army were.

The real oddity is Tau with a more narrow spread of results, particularly when you consider that their average placing is just below the middle (103rd against a middle of 92nd).  I have some theoryhammer ideas as to why, but would love to read your ideas as well.  Are Tau handily beating some opponents, but then coming up with things that they just can't beat ?  Is it Invisibility and Psychic Shriek ?  Is it rerollable cover saves ?  Or just the good old fashioned fast assault threats ?  Is it the mission requiring very mobile armies while Tau players are sticking to maximum firepower and ignoring mobility ?  Or maybe a combination of all of this ? 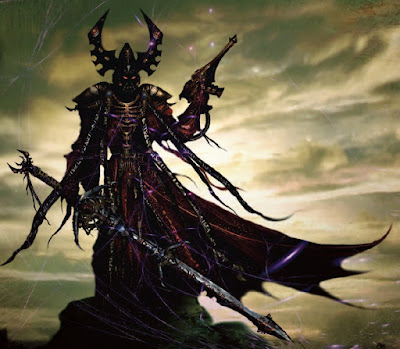 So overall it looks like Eldar are getting even more popular at tournaments.  The top four strongest armies are still Eldar, Marines, Necrons and Tau, however there are some less popular armies that are still doing very well, such as Dark Angels & Daemons (plus Khorne Daemonkin & Cult Mech).

The increase in the spread of the performance of Eldar, in my opinion, means that while players are learning to beat the poor Eldar players and/or those with less optimised lists, when facing good players with optimised lists it's still really hard (not impossible) to win. 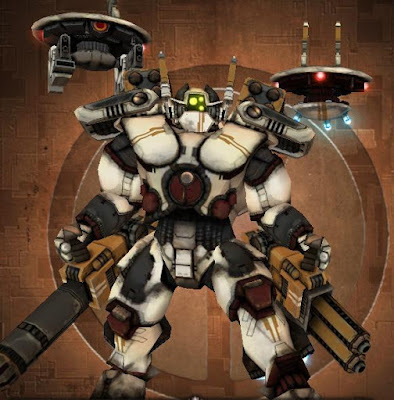 Does this follow your idea of where the meta is, and which are the strongest codexes ?  What's your thoughts on Tau's average performance (10% of the field yet only 7% of the top 30, a drop of a third).  Yes I know a lot of armies do make the top 30 at all, but why is an army that is seem as so strong not doing better ?  It was interesting to note that Frankie (of Frontline Gaming) switched from his tournament winning Tau to a Gladius Strike Force with a Culexus Assassin & Inquisitor with Servo Skulls for this event, is Tau not quite cutting it when it comes to the big competitive tournaments ?.

Posted by Rathstar at 18:10 No comments: 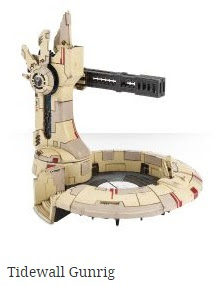 After a one day small tournament with my Tau I was tweaking my army list, and I wasn't sure what to spend the last 100 points on.  I was tempted with putting a heavy railrifle armed broadside in, but I already had a few broadsides in the list, and wanted something different. 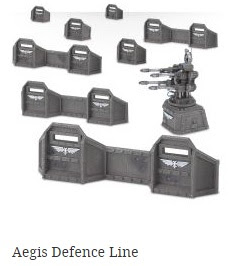 The Tidewall Gunrig can't protect as many models as a defense line but it can move 6" a turn if there's no enemy or terrain to block it.  The railgun is better than a lacannon, but lacks skyfire and interceptor.  Initially there was uproar when the Tau terrain pieces were released, but I think things have died down when they never appeared in every tournament list like some people were saying they would.

The big weakness of the Gunrig is that like the Quadgun on the defense line it only counts as 2 wounds at toughness 7 with a 3+ save, and although you can't destroy the drone base the railgun is quite easily to kill.  This I saw in the first battle report I saw the Gunrig in, it was blown off 1st turn before it got to fire.  However in another (this time written) battle report I heard Darkstrider used the railgun to instant kill a Hive Tyrant (Darkstrider has a rule that anything he or his unir fires at is -1 toughness and that this affects instant death).  I think those two examples show what the Gunrig will be like, a bit hit and miss, but overall fair for its cost.

Anyone onto my wonderful purchase, because at the end of the day what tipped me into buying it is that it looks stunning (as terrain pieces go): 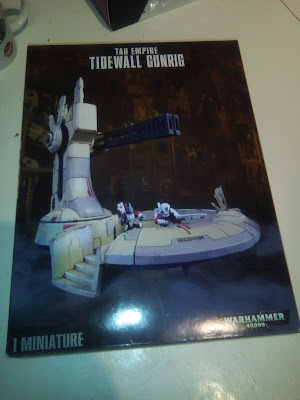 Opening the box, along with the sprues: 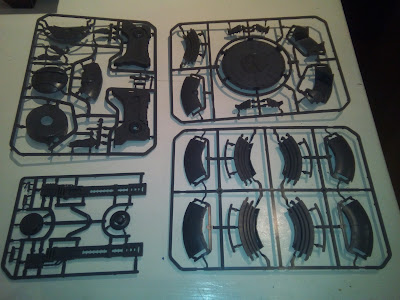 it was nice to see that the rules for the Gunrig did indeed some in the box, particularly as I did not have the rules for it as I bought just the new codex (rather than the Kauyon suppliment): 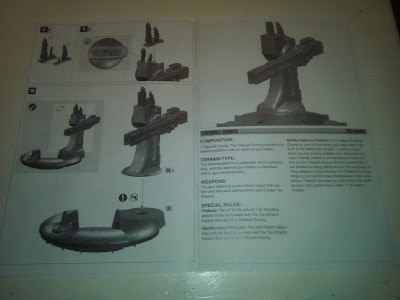 The instructions were clear, and the Gunrig came together very quickly and easily.  I was very interested in how many models could fit on the Gunrig.  I was a bit disappointed when I put my Commander that I'm painting on the Gunrig base: 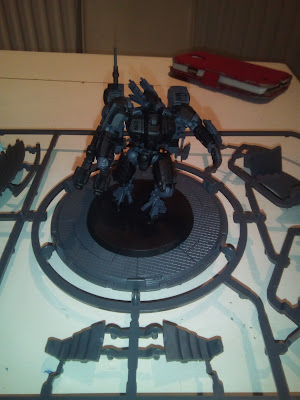 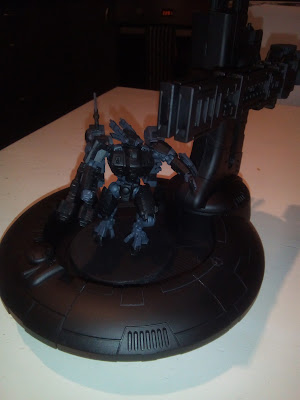 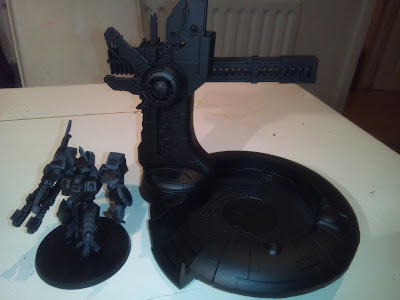 As you can see the commander takes up most of the space on the Gunrig, meaning the Gunrig is more for the infantry rather than the suits.

Against a smart opponent I think the Gunrig will die very quickly if there's anything in the enemy army that the Railgun would be a threat to, but the Tidewall Drone would still be useful for letting an objective secured kroot unit go to ground for a 2+ cover save while the Drone moves them 6" a turn.  However for that the cheaper Droneport would be a better option: 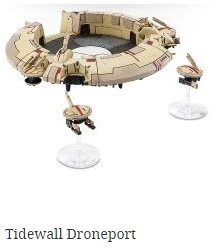 The Tidewall Gunrig, along with the Droneport and Shieldwall all look really nice, and I can't wait to get mine painted up and have some games with it.  Better pictures will follow once I've painted up my Gunrig (and Commander). 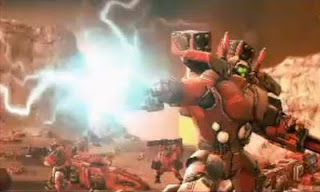