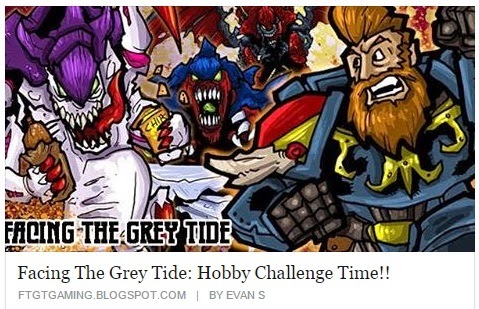 So we are getting towards the end of January, and the blog has been depressingly silent.

That has mainly been because of my embarrassment from completely FAILing so bad at the December portion of the Challenge.

Apart from finishing off models not being the most exciting thing in the world, my painting work space was, to put it bluntly, not really helping: 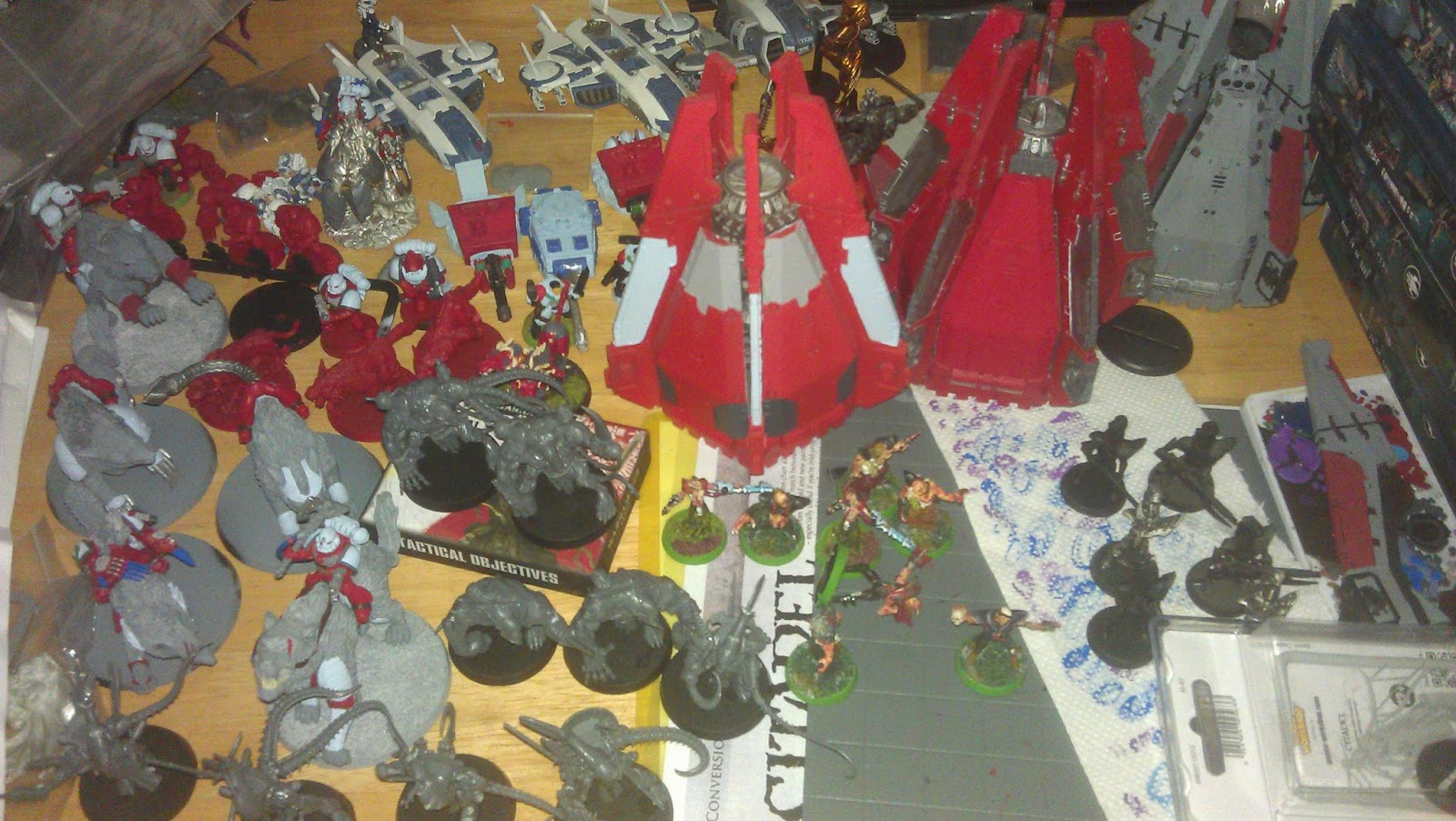 Way too many projects on the go at once, and if the desk was bad enough the area in front of the desk made it harder: 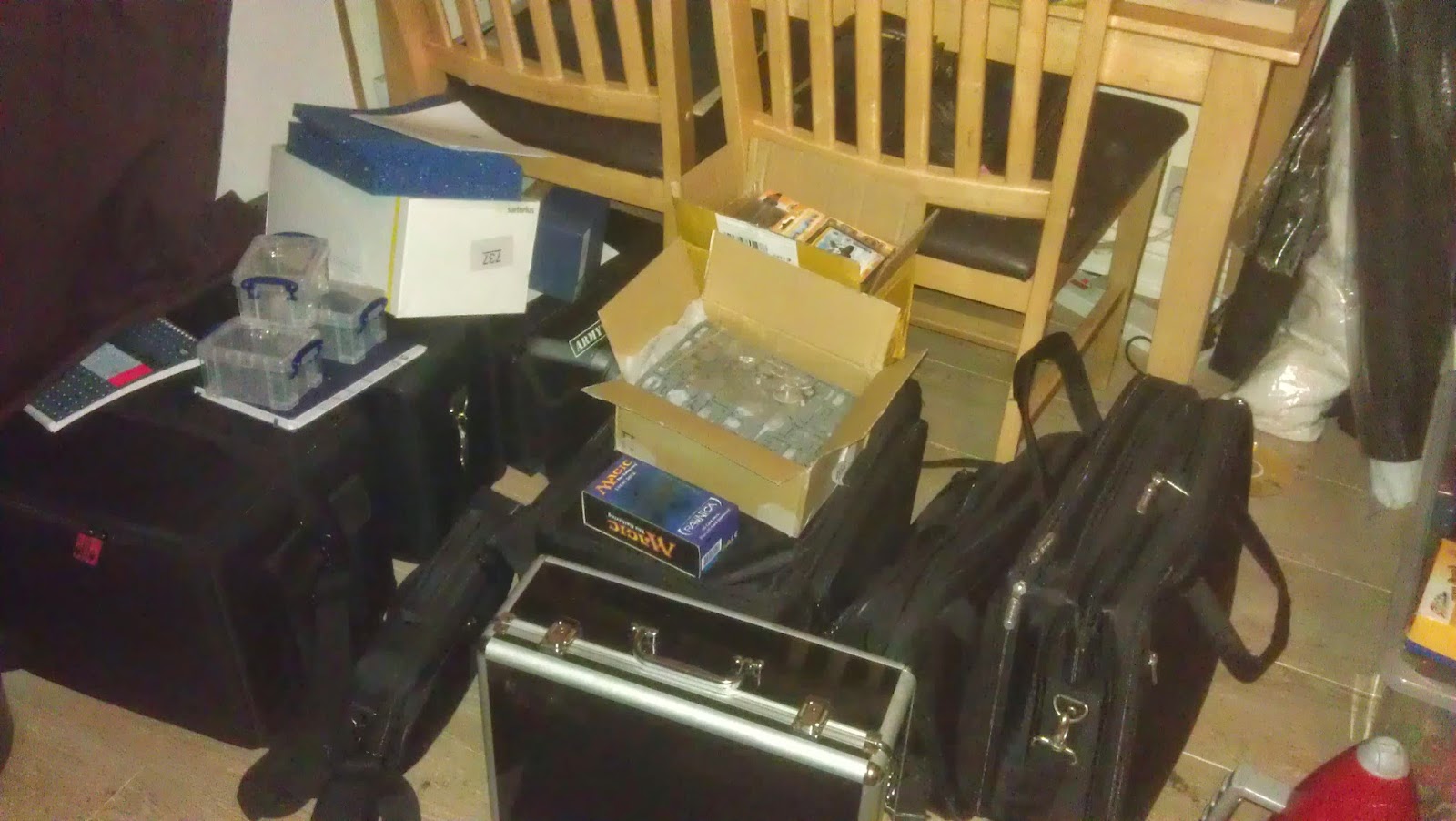 As I mentioned in my last post I was due to have a have a game over the xmas break against a mate with his Nids with my Space Wolves.  It's nearly an xmas tradition that my mate's Nids give my Wolves a good kicking, but I was determined to change that !  Deciding on my list I thought it would be better to have a 2nd squad of long fangs rather than a Predator.  So effectively I changed my December challenge, and having to have the models all assembled gave me more of an incentive to get them ready.  As well as assembling the long fangs I got the last two thunderwolf riders assembled.

Although the battle was short and sweet I leant about my army and had a fun game.

A quick recap of the list I took was:

Turn 1 started well with the 2 units of 15 gaunts that had moved a bit forwards to allow the 24" range exorcrines to fire was charged by the Wolves, Cav & Assault Marines, while the Bloodclaws and Grey Hunters came down on a flank next to the Nids.

The assault was brutal and all 30 gaunts died in the assault.

However the whole Nid army was at optimal firing ranges, and the Wolves were wiped out, and the Cav was bought down to 2 models (I had lost a few Wolves, and 1 thunderwolf on the Nids first turn shooting from an Exocrine and a Hive Tyrant).  Canis and the remaining thunderwolves were then charged by a big gaunt unit with a Prime.  Although Canis put up a brave fight slicing gaunts left, right and centre (he had 18 attacks over 2 combat phases due to counter attack and rampage) he was eventually dragged down, and the Prime finished of the thunderwolves easily.

On the flank the Iron Priest and Assault marines were just about to kill an exocrine (before we called the game), however the Bloodclaws were tied up in combat by Hive Guard.

The number of very accurate (twin-linked from a formation) large blasts from the Nids took it's toll, not to mention the low AP shots from the exocrines.  As well as being a bit over confident, I attacked along a wide front (although to be fair I had to set-up first and then was seized on), which meant all of the Nids could fire back at optimal range.  Also I was too cautious (as always) with the drop pods meaning the units did not have much effect on the game, they should have been placed more in the middle so they could help assault the middle of the nid lines on the following turn.  Even if they had disrupted the charges and only two of the three assault units had got in on turn 1 it would have be better because with the gaunts being fearless both sides would have been locked in combat (safe from any Nid shooting).

I like the list through.  The only thing I'd like to change would be the scouts, they did nothing before we called the game, and they were only taken to give me a 2nd Elite so I could run the Suppliment detachment which gives thunderwolves and wolf guard WS5.  By dropping the Long Fangs Drop Pod (although it means one of my troops has come in via normal reserves) I can upgarde the scouts to 5 Wolf Guard with Jump packs (only upgrade is melta bombs on one member).  A 2nd Iron priest would probably be more effective, but I don't want too many duplicates.

and maybe not face Exocrines, let alone where one is twin-linked :)

So getting back to my painting progress, below is the poor progress on the Long Fangs: 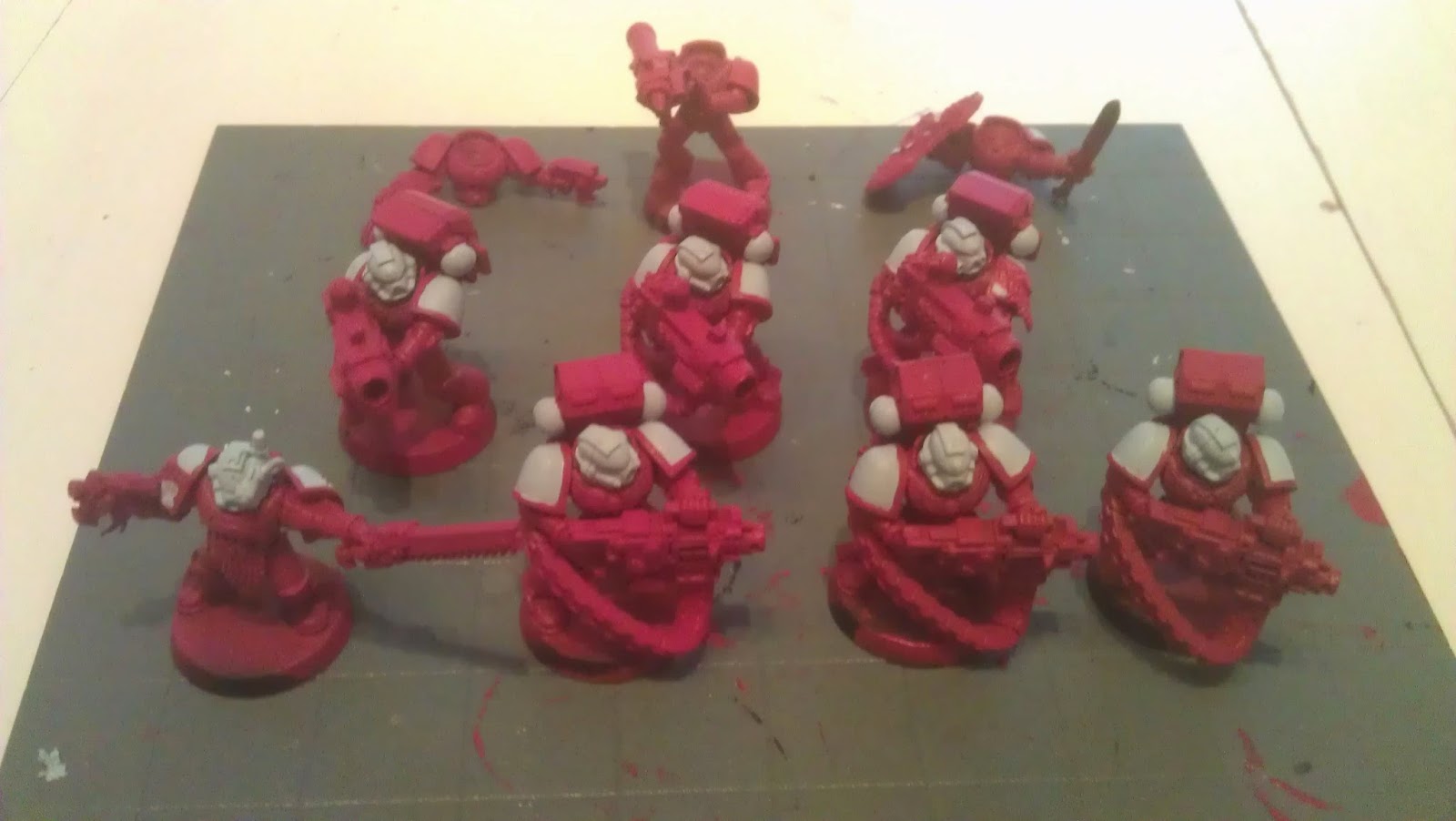 So you can see 3 weeks after the deadline I'm not even near half way through.  At least I have cleared up my painting area, and the army cases around it, plus I have assembled all I need to put 1750 points on the field.

What I'm going to do is keep my Month's tasks the same, apart from switching December to the Heavy Bolter / Plasma Cannon Long Fangs squad, and adding the last Missile launcher & 2 Thunderwolf Riders.into January (to replace touching up the drop pods).

This will mean that they there is no way I can finish the January challenge on time, but I'm hoping that I will catch up over Jan & Feb.

Other news is that I've played a couple of games with my Dark Eldar, particularly trying out the new units in the painting challenge (ie. Grotesques, Court of the Archon & Clawed Fiends) and they performed very well.

To give me more of an incentive to paint I've also signed myself up to a few tournaments.  I can always take my Tau, but it will give me an incentive to try to get the Dark Eldar ready.

The events I'll be attending are:
Here's hoping more hobby progress over the next month :)


NB: With the change to December, not focusing on completing half painted models, and being reasonable and ignoring stretch goals, my Challenge Schedule is: 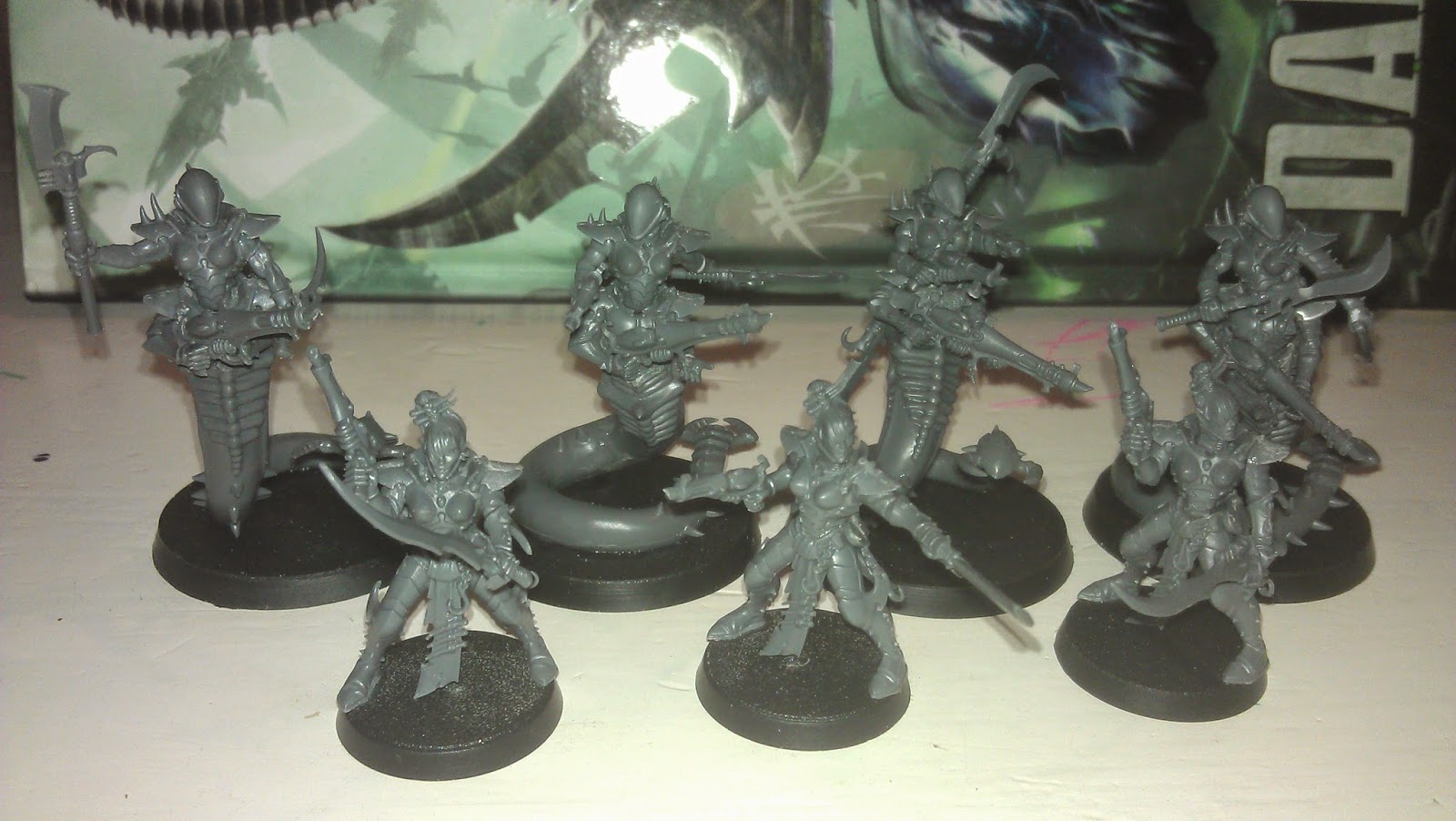 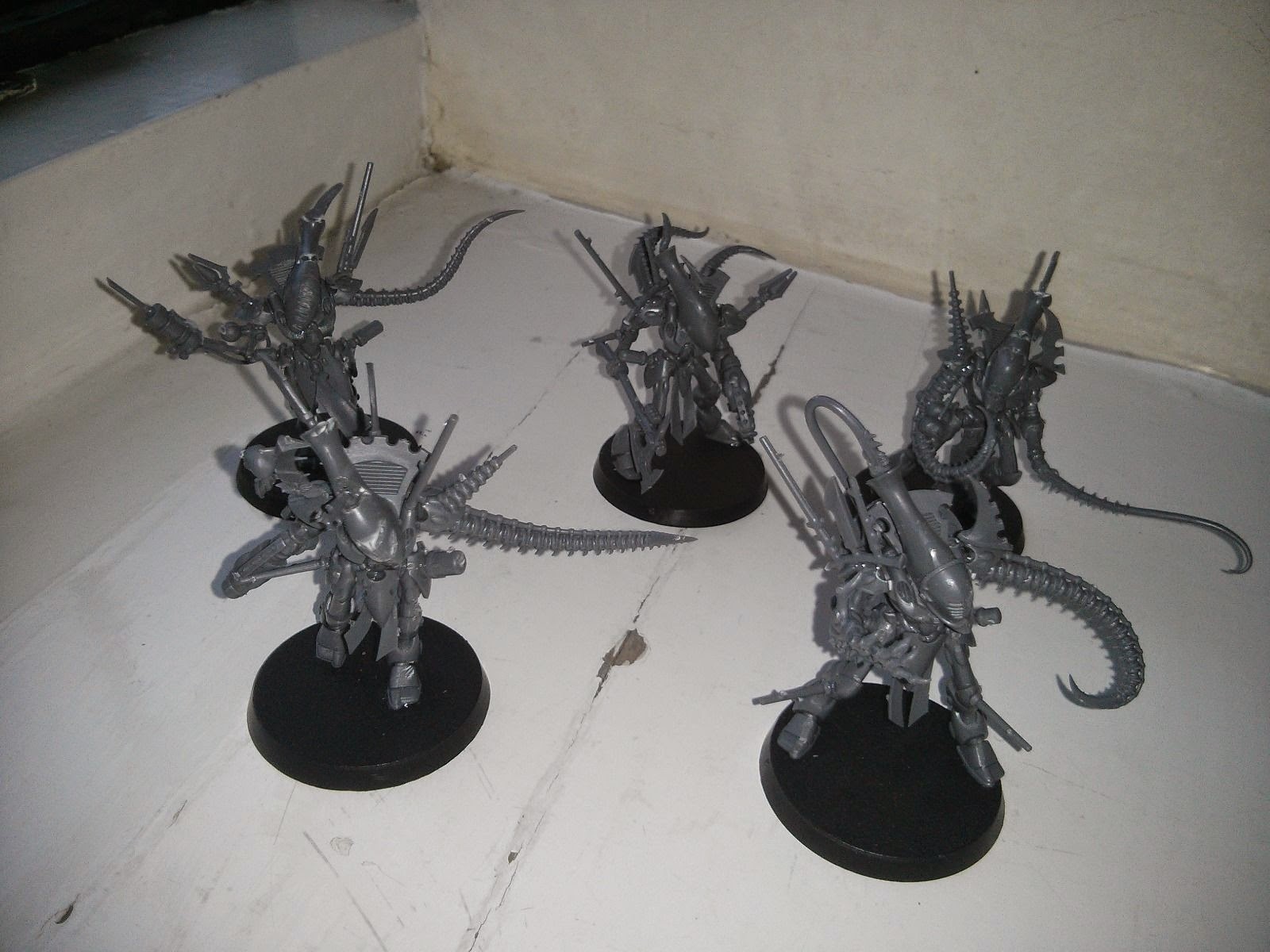 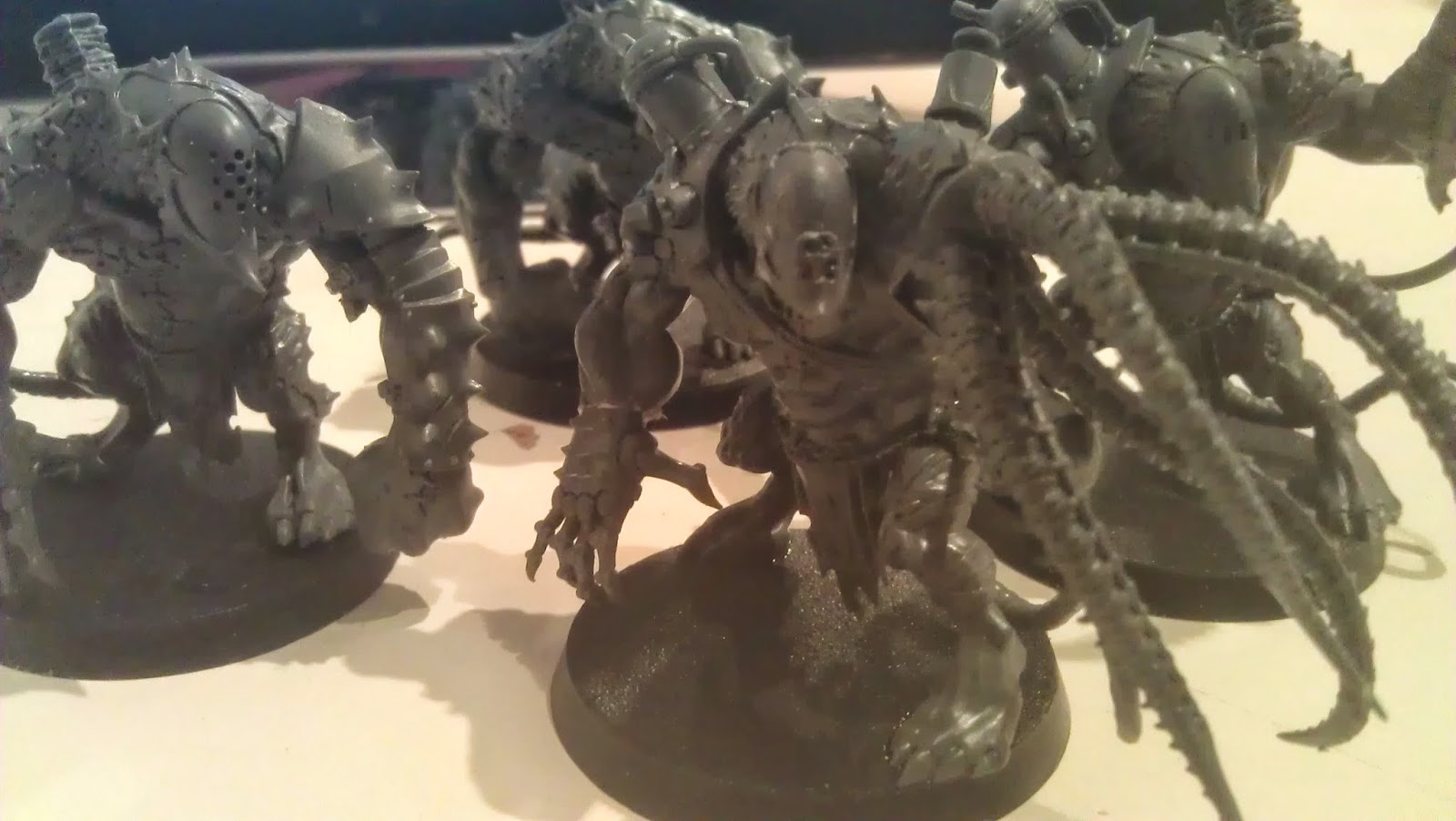 May: 5 Scourges (Converted from Raider Crew with Blood Angel wings)