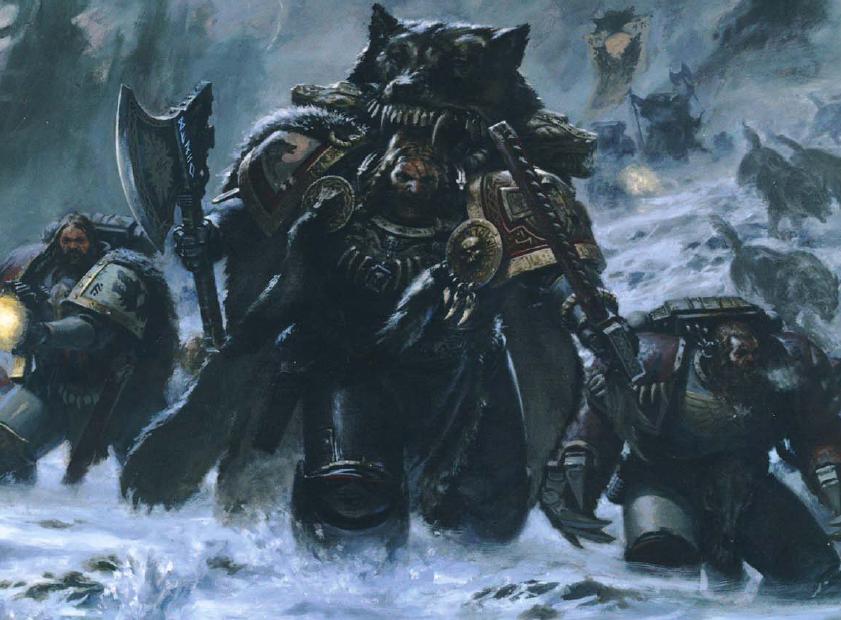 The Space Wolves codex has been out for a few weeks, and I've had a chance to go through the codex quite a few times tweaking my old list to see what would be better now, and playing a few games.

Here are my top winners and losers.  There are quite a few winners in the new book, so these are my top 3:


1st - Thunderwolves / Thunderwolf Mount:  From the 20% drop in the base cost of thunderwolves, to the increase in their maximum unit size, to all their attacks counting as rending (not just the basic attacks), to the extra wound it gives characters now (not only the wolf lord but the wolf guard battle leader and iron priest really benefit from this) to all thunderwolves being allowed special melee weapons.  This is alos not counting the warlord trait that Canis and Harald come with (that all warlords have a chance of getting) that makes thunderwolves stubbon and furious charge if they are within 12" at the start of the assault phase. 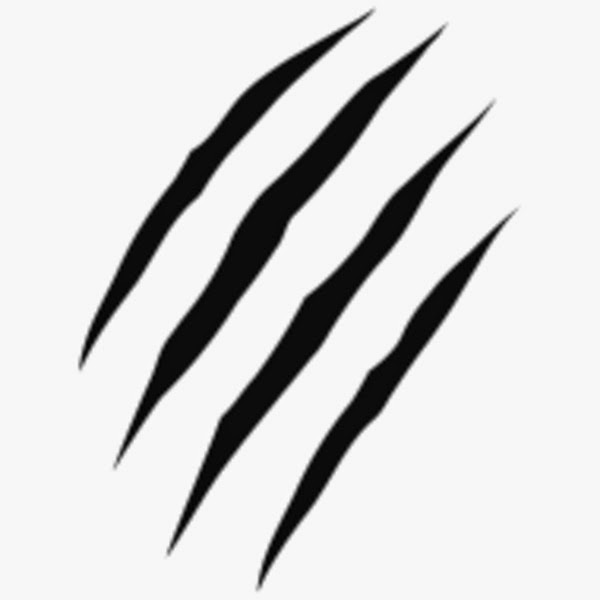 2nd - Wolf Claws:  These changed from Lighning claws that could reroll to hit or to wound to +1 Str Shred.  The +1 Str combined with the reiability of rerolling to wound make these excellent weapons.  Especially when you can combine it with a 2nd specialist weapon to gain the extra attack.  A powerfirst or thunderhammer would be a good choice to give the option of Str10 attacks against vehicles and monstrous creatures. 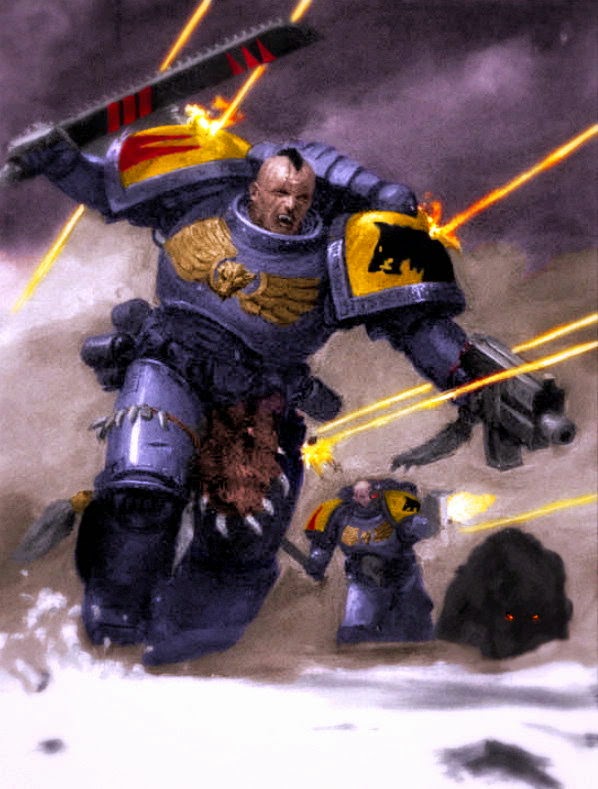 3rd - Bloodclaws & Skyclaws:  With a 3 point drop these can much better compete in their respective FOC slots.  I think a cheap 10 man bloodclaw unit in a drop pod for only 155 pts is a real contender for one of your troop choices.  Skyclaws get very stiff completeion from thunderwolf cavalry, but if you have the models and don't fancy buying more thunderwolves there's nothing wrong with putting them in your army.  Although swiftclaws also got reduced in cost I don't think they quite compete within a very tough fast attack selection.

Honourable mention must to rune priest with their significant points drop (even if the Wolves magic lore is poor). 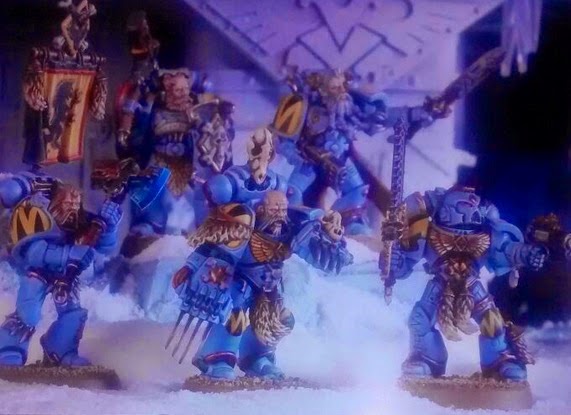 1st - Power Armoured Wolf Guard:  Although these guys start out at the same base cost as they had before, their downfall is all about the cost of their upgrades and their cost when added to units.   When added to units wolf guard are a 10 point upgrade on a basic model in the unit, making them  more expensive in infantry squads such as Bloodclaws & Grey Hunters (although significantly cheaper in Skyclaws and Swiftclaws).  Next the Wolf Guard previously had cheaper weapon upgrades, now they choose from the generic weapon upgrades list, which means many of the weapon options are more expensive, the chief among them the combi weapon which doubled in cost.  The typical aggressive unit wolf guard upgrades were powerfist and combi weapon, this set-up has increased from 43 pts before to 59 pts for a unit of Grey Hunters (or 53 points in a unit of power armoured wolf guard).

When you add in the fact that Space Marines in general do not suffer too much from morale issues (due to And they shall know no fear), so they don't need the leadership buff as much, I think you will see less wolf guard in power armour in armies

2nd - Long Fangs:  The split fire rule changes to the same as the main rulebook rule so you can only split off one shot rather than as many as you like into the 2nd target.  The weapon cost got increased to the same as Space Marine Devastators, so a full missile launcher unit went up from 140 to 165 points.  I used to use a 5 man squad with 4 missile launchers which went from 115 to 135.

Now Devastators are rarely seen in competitive lists in any great number, and if I was going to use them it would be in a Imperial Fists detachment where they get tank hunter (an excellent USR), so 5 points more for Counter Attack and Split Fire vs Tank Hunters seems like a poor comparison.  Next the competition got slightly better.

7th edition vehicle tables made vehciles harder to one-shot kill, plus the Whirlwind came down to the cheap 65 pts, and the predator with sponsons went down in cost.  A predator with Autocannon turret and Lascannon sponsons is now 115 pts, 2 Str7 and 2 Str9 shots for 20 pts cheaper than 5 Long Fangs with 4 Missile Launchers.

On the plus side for Long Fangs, Plasma Cannons & Lascannons came down in points in line with the Space Marine codex, and the points increase is not that drastic.  Putting them on the table would not seem strange, but if you have other heavy support choices you may look elsewhere, and I think the days of double and triple long fangs squads are gone.

3rd - Scouts:  With the lose of Behind Enemy lines, these are just scouts from the marine codex with WS & BS 4 for the same cost as Grey Hunters.  They do get the option to take a special weapon instead of the heavy weapon in the Marine codex, but at the same cost as Grey Hunters and not being troops I don't see you will see many of them on the board apart from Sniper Scouts to hold a back field objective.  Even the option to get a second melta shot the turn they turn up from reserves (a Wolf Guard pack leader with a combi-melta) has gone up from 23 pts to 34 pts.

Even the option to do a close combat scout unit is not as good as the vanilla marine book because they do not have a landspeeder storm as an option.  For the same cost a Grey Hunter unit in a drop pod will do better.

The only saving grace I can see is that they are the 2nd cheapest elite slot (after Lone Wolves) if you need a 2nd Elite slot to fulfil the detachment requirements in the Space Wolves suppliment.  However even then a few points more gets you a dreadnaught or a tooled up Lone Wolf.


Honourable mention goes to the Cyberwolf which lost T5, however they are all characters, even the ones accompanying the Iron Priest, so they can accept challenges.  Oddly enough the Rune Priest gets an honourable mention in the losers section as well for the nerf of the great psychic powers Living Lightning and Jaws :(


Those are my top 3 winners and losers.  What units do you think got the best buff or nerf with the new codex ?

I leave you with parting shots of my Dark Eldar who are in transit to their new realm in Commorragh (a new storage case) to house some new additions (Hellions) and make room for more Coven members (Grotesques).

The rumours of the new codex means I may use less wracks (as I'll have too many Elites) but will keep my 6 Venoms (with only a possible slight increase in cost, the likelihood that I can take them as separate Fast Attack slots, and the specific Dark Eldar detachment allowing 6 Fast Attack slots).

Rather than leaving the battles to his Wych Cult & Coven allies, Archon Rathstar may return to the battlefield :) 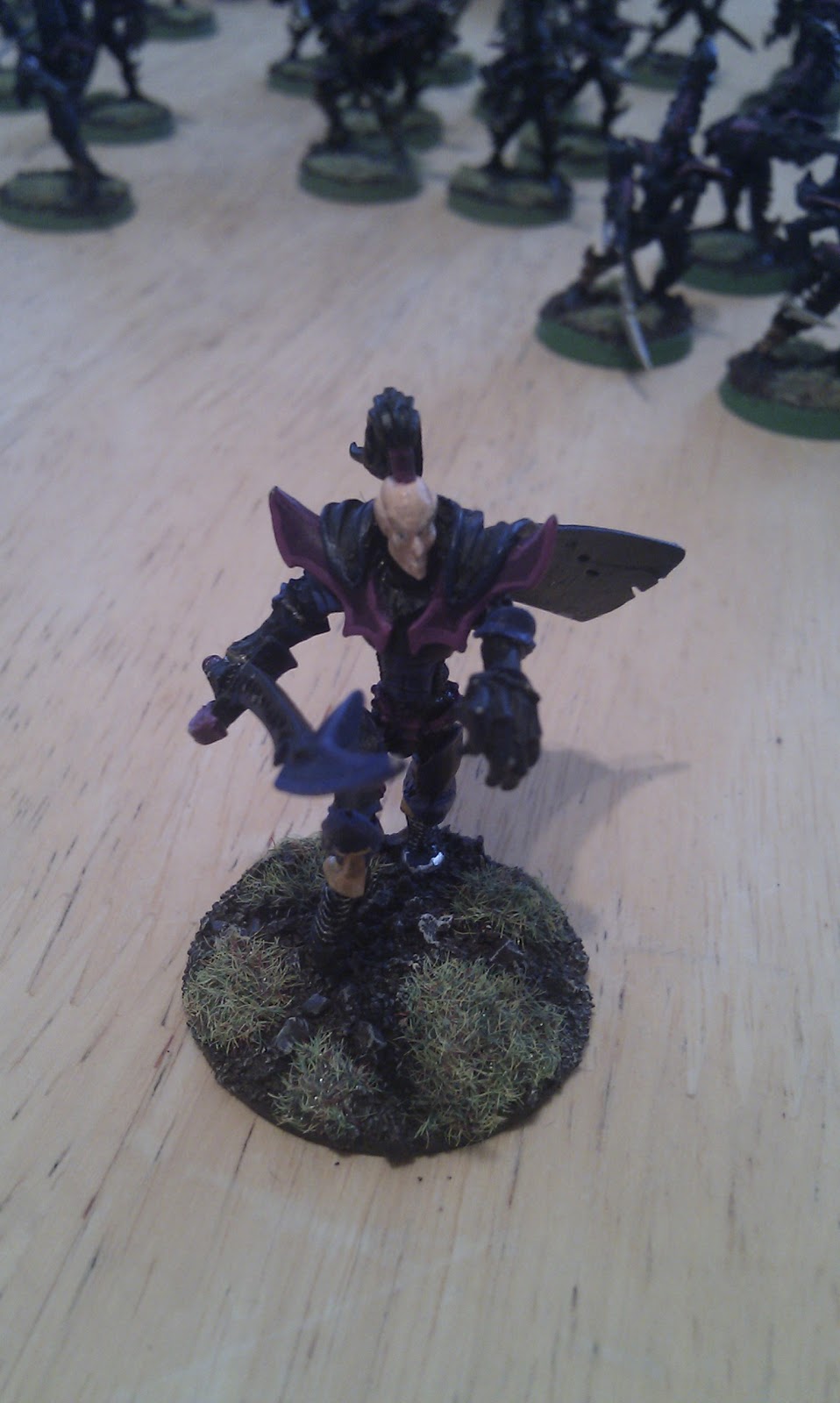 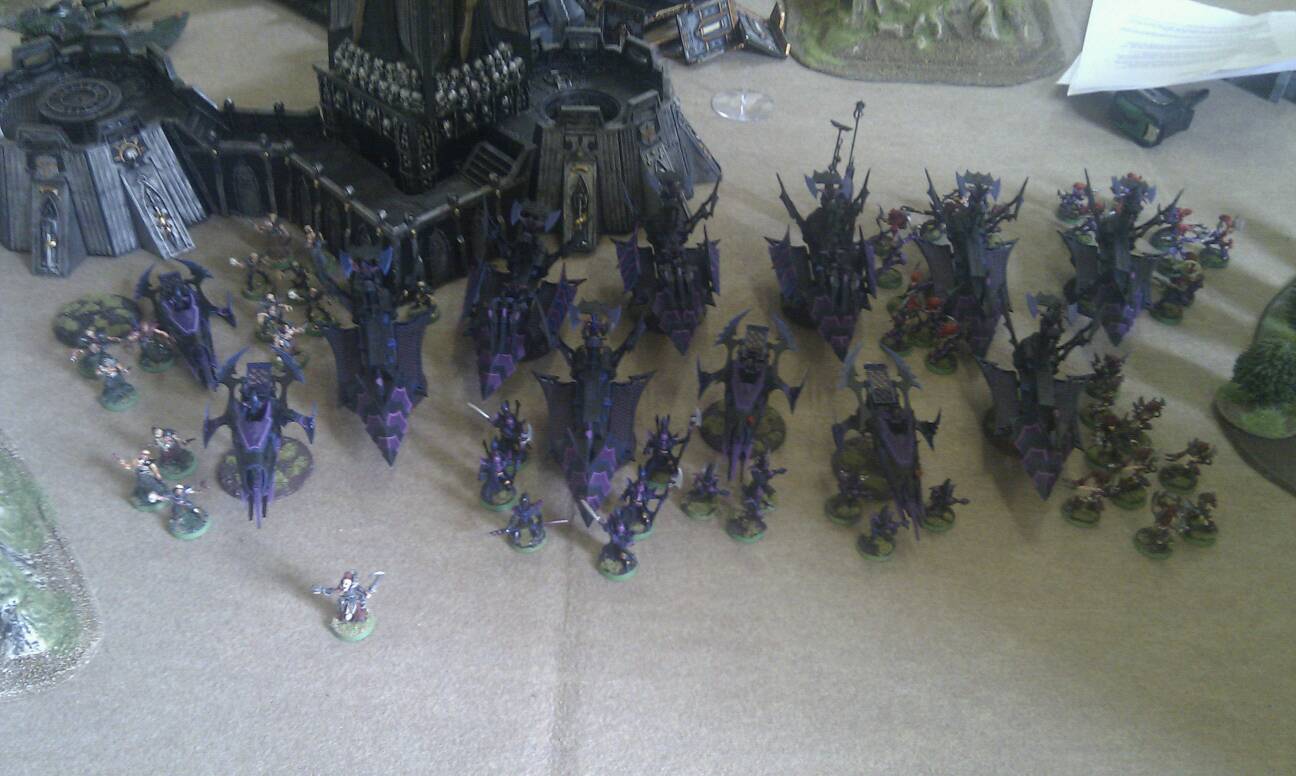 and it will be interesting to see which Flyer makes my army list (or maybe both as I can still have 2 Ravagers and both fliers): 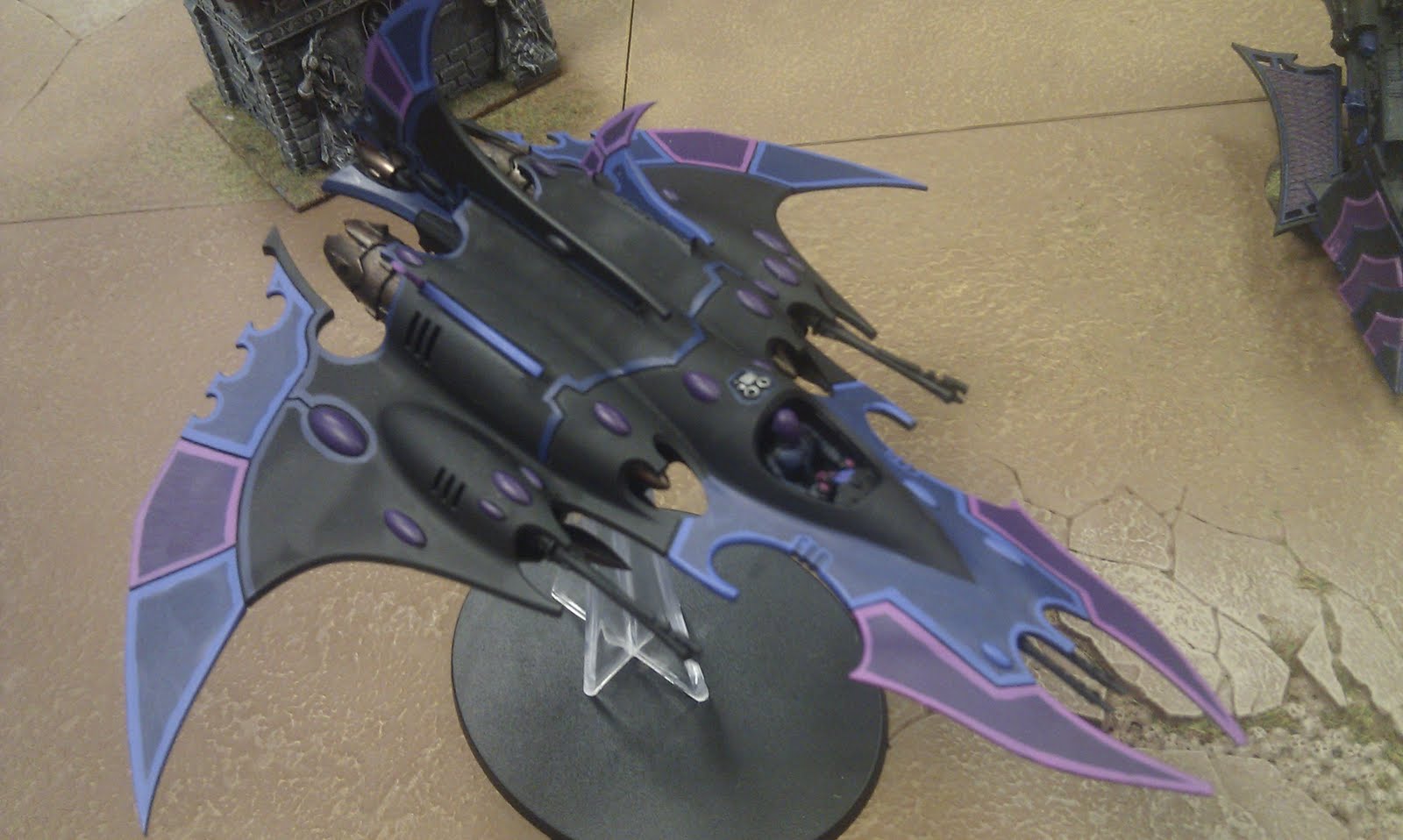 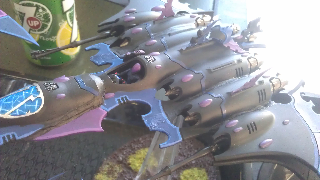 Only a few days left to the codex now... 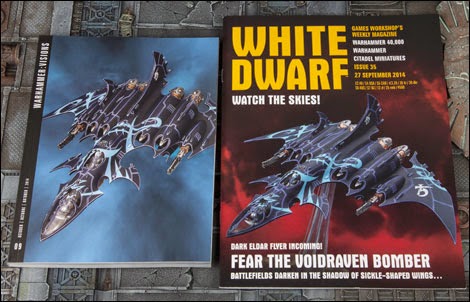 It's been an agonising wait, but titbits from the new Dark Eldar release is starting to come out.  Last weekend there was the new Wracks, and today there is pictures of the new Voidraven.  I really like the model, and I'm happy that it looks similar to the model I've comverted and have been using for the last year or so: 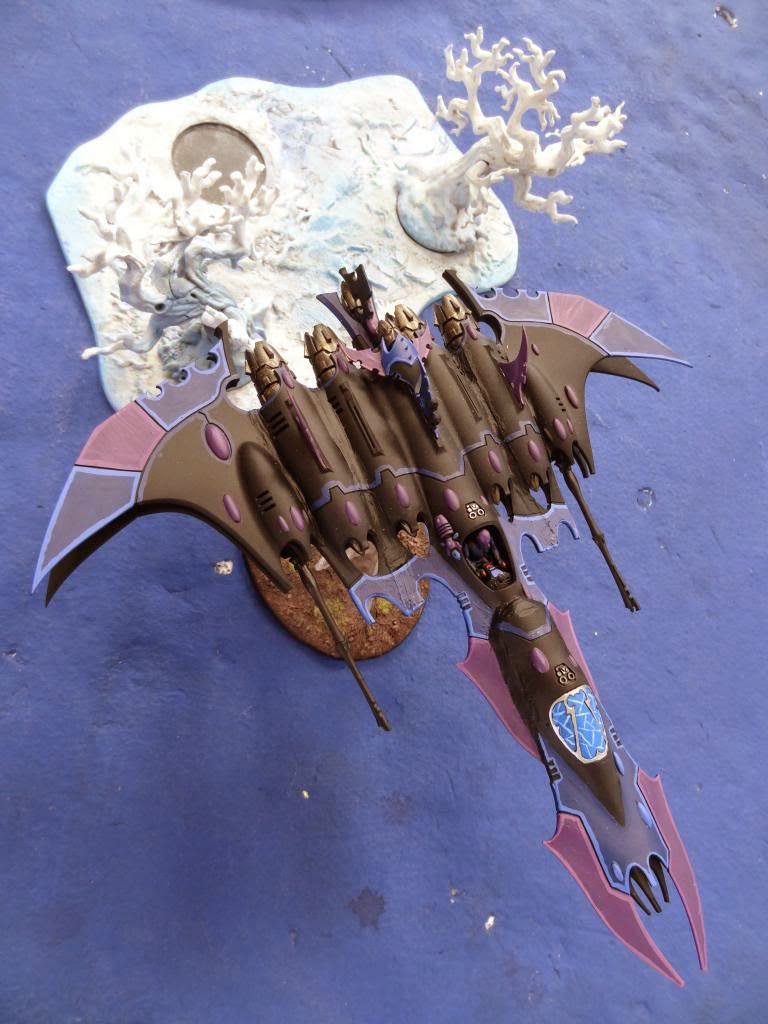 I really like the fins either side of the pilot on the new official model, as it sets off the thin neck of the flier (I may add that to my conversion).  Another difference is the official model has a large central fin (like the razorwing), while mine has a much smaller central fin (to make room for the Void Bomb):

If I did not already have a converted Voidraven I would definitely be getting the new model.  My only hope now is that they move the fliers to Fast Attack slots in the new codex.

Which leads me onto the codex.  Most recent rumours is that the codex will be up for pre-orders this weekend, being released on the 4th October along with the Voidraven and the Data Cards.

Last week White Dwarfs mentioned that Wracks are Toughness 4 and have Feel No Pain, and the latest rumours point says the battle report in White Dwarf next week "indicates that pain tokens are now a static effect with different effects automatically gained at the start of the turn depending on what turn number it is. My source says that army wide FnP, for example, is gained at the start of Turn 3".

I'm not sure what to make of this.  Dark Eldar has always been an alpha strike army, it hits hard and fast.  Feel No Pain on wracks, or wyches with the help of a haemonculus, was very useful for getting the assault troops to their target on turn 1 and 2.  Turn 3 Feel No Pain might be bit too late, but it's too early to worry, best to see what other information comes out.

I can't wait to see what the new codex brings.

PS. What's been keeping me away from blogging is a demanding work schedule, and painting up my Space Wolves for a tournament in two weeks.  I've converted Archeon's horse with Tyranid armour plates to be the mount for my new Iron Priest: 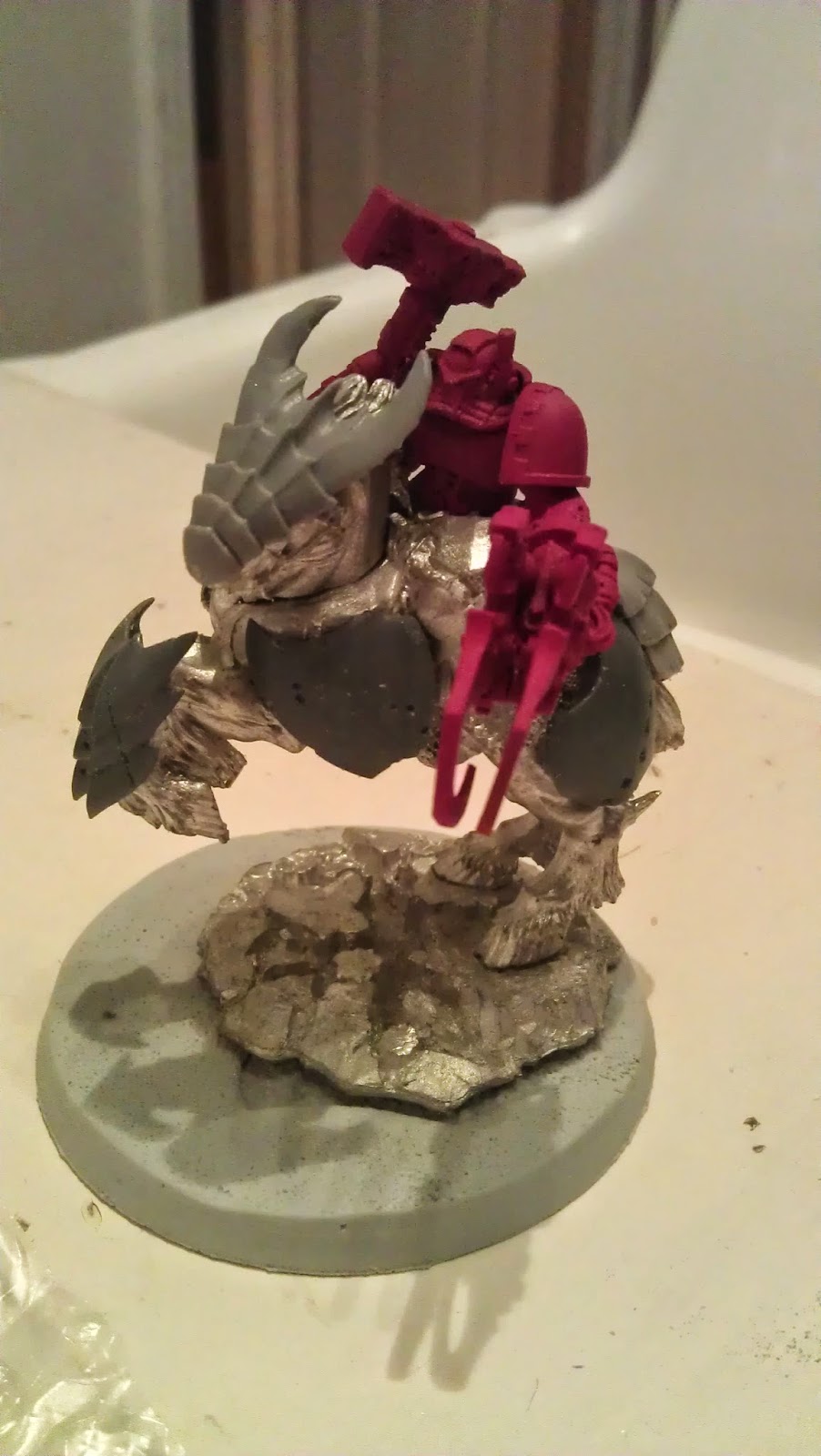 and I have to paint up Canis, increase my thunderwolves from 4 to 6, upgrade the painting on my bloodclaws and skyclaws to my latest army colout scheme, and various bits and bobs.

For my last tournament I painted up my 6th (and last for some time) Broadside, to replace a converted model I had.  Now my Tau thoughts turn to more mobility and increasing the long range anti tank against AV14 after an Imperial Knight and 2 summoned Bloodthirsters pinned me in allowing Pask and Wyverns to pound my army unmolested (but more on that in a later post). 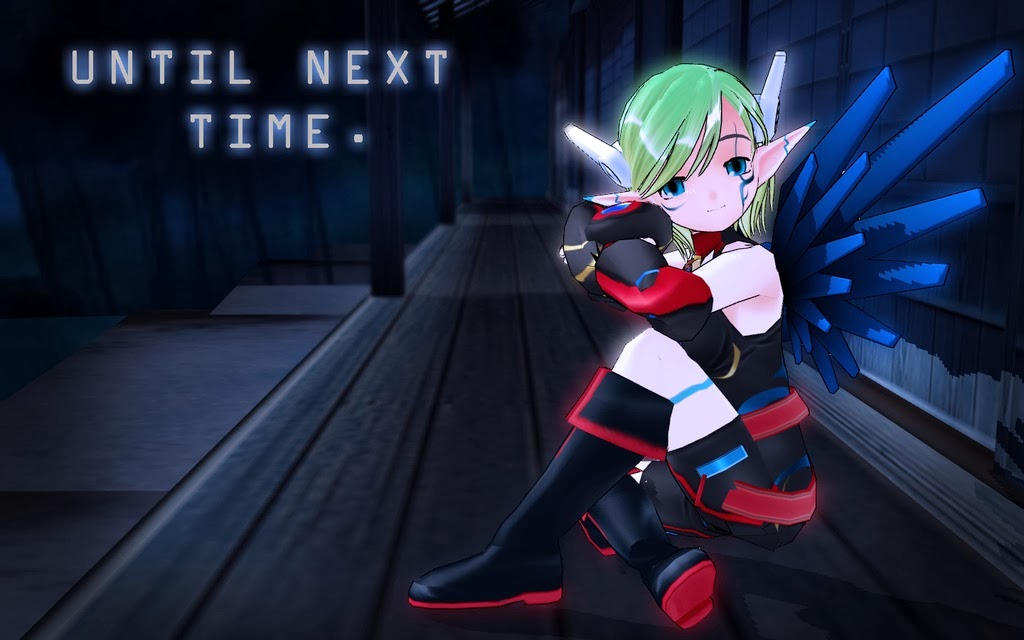 Posted by Rathstar at 16:47 No comments: