Where is the meta now ? 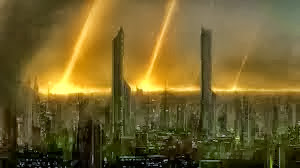 The meta is changing so rapidly now that the codex releases are so much faster than before.  I'm particularly feeling this as I paint so slow.  One thing I can do is look at the army composition at big (and competitive) tournaments to see where things are going.  Another tip is listening to tournament report podcasts.


With all tournament army spreads it has to be taken with a pinch of salt, and any army should be given a +2/-2 margin of error.  However I guess none of us are surprised by the top 4 armies, particular the rise in Eldar now the codex has been out for a while.  I expect the next big rise to be marines, as people paint up bikes and the new anti air tanks. 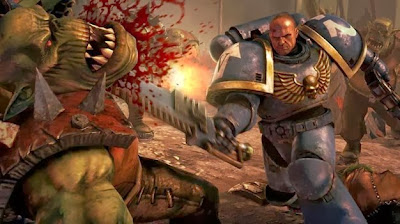 You are still likely to face a lot of MEQ it's just spread between the codexs (11 Imperial MEQ, plus 2 more CSM), and as said this will only rise when marines increase in popularity. 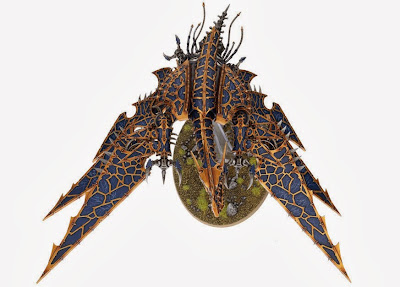 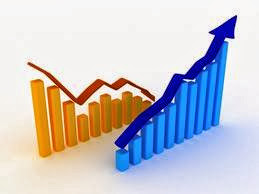 As one of my main armies rises in popularity (Tau) the other sinks towards the bottom (Dark Eldar).  Dark Eldar really stuggle against both Tau & Eldar, and the general trend towards multiple shot mid strength weaponry to strip hull points, because while they are good to strip hull points from regular vehicles these weapons murder Dark Eldar vehicles.  On the plus side opponents will be less likely to be ready to face the speed of the Dark Eldar (let alone the fearsome early shooting they can put out against an unprepared opponent).  A more common occurrence will be that Dark Eldar are underestimated, helping the Dark Eldar hopefully punch above their weight.

What do you think of where the meta is moving to at the moment.  Does your army have the tools to deal with top lists while still being balanced enough to take on other lists ? 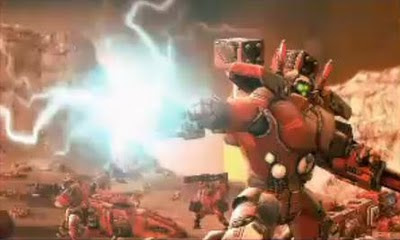 Well first things first and my Tau have been bloodied in their first tournament with the new book.

My initial games made me have a rethink of some specific parts of my list.  The first part was markerlights.  Markerlights are excellent for the Tau useful in so many ways but mainly to increase the medicore BS3 and removing cover, I particularly like increasing BS to 6+ to give a reroll on the Gets Hot roll for Overcharging Ion weapons.

Pathfinders have improved this edition in that they are cheaper, and you don't have to bring a devilfish for them, therefore compared to bringing one unit under the last book I immediately moved to using  2 units without a devilfish.  However pathfinders have also got worse in that they have gone down to a 5+ armour save meaning it is essential they hug cover which can restrict where they can deploy which applifies their other big weakness...

Pathfinders are very static, and with the increased movement in 6th edition compared to 5th, and the emphasis on putting a decent amount of terrain on the board this can be a big weakness.  So I decided I wanted mobile markerlights, and I believe the Tau codex has 2 good options (a Skyray is not that mobile and can not be the main source of markerlights).

I think the best sources of mobile markerlights in the Tau codex are marker drone squad with a commander or markerdrones with crisis suits (with or without an attached commander), ok so really only one source.  I think a commander with markerdrones is not the best use of a commander.  Yes you can have upto 12 markerdrones boosted to BS5, but it's very rare that a single target needs on average 10 markerlight tokens put on it.  The commander also is not boosting a unit with a PENchip (Purtide Engram Neurochip to give either Tank Hunters or Monster Hunter).

Ideally I'd like a Commander with buffing abilities, with 2 marker drones joining 3 dual missile pod suits with 6 more markerdrones.  However this came to a lot of points and I didn't want to put so many points in one unit, so I went with a MarkerRain lite team (the Rain referring to Deathrain the old config name for dual missile pods):
Shas'vre with Control & Command Node, Drone Controller & PENchip
2 Shas'ui with 2 Missile Pods and a Target lock each
accompanied by 6 marker drones
A nice tidy 256 pts, that throw out 8 twin-linked str 7 shots at up to 2 targets buffed by either tank hunters or monster hunter, plus 6 markerlights at another target that hit at twin-linked BS3 rather than their normal not-linked BS2

Now I think you need more than one source of a decent number of markerlights, so I needed another source, so for this I went outside the Tau codex.  As forgeworld was allowed for the upcoming tournament I choose Tetras.  In the Imperial Armour 3 - Second Edition they had been reduced from the ridiculous 4 shot markerlights to 2 shots twin-linked and cost 35 pts for 2 hull points av10.  I took a squad of 3 for 105 pts, so just under the cost of 9 pathfinders with a shas'ui.  They give (on average) the same 4.5 markerlight hits a turn, but their mobility should really help.  My only concern was that with the only other vehicles in the army being av13 they would be targeted by a lot of mid to low strength heavy weapons (not to mention basic bolters) and die quickly, but time would tell.

Next I was worried about my shooting against monstrous creatures particularly a troublesome wraithknight that my Dark Eldar had been on the receiving end of a couple of times.  With no plasma or rail weapons in the army I choose to give 20 of my kroot sniper rifles, particularly now they can benefit from markerlights.

Also a concern for me was anti-air (even though this tournament was comped and limited flyers and flying monstrous creatures to 3).  I have a skyray which is good, but I needed more.  A Quad gun on a Aegis is another good option, but I've found that the Aegis can make my playstyle too static.  A flyer of my own was the solution I went for to aid the Skyray, and I already had a Barracuda plus I don't like the look of the codex flyers so that was that.

I've found that the Tau work best when boosted by markerlights, so putting skyfire and interceptor on riptides is ok, but not brilliant as they have to use their poor BS3, while waiting for the next Tau turn they can be boosted.  Also I've found that the riptides are best putting ion templates to infantry and leaving flyers to the skyray and the twin-linked str 7 shots from the broadsides and crisis suits (once they get a markerlight hit or two to boost their snap shots).

Lastly I was concerned with low ap.  I had been using piranha squadron which is very effective at thowing out more str 5 shots.  You can't complain with 8 shots for 40 pts, however my infantry firebase already did this.  I didn't want to reduce the infantry firebase because the Ethereal's buffing abilities would have less targets so the piranhas had to go to put in more low ap.

With this codex I have fallen in love with large blasts from Ion Weapons, so to compliment my Riptides Ion Accelerator and Hammerhead's Ion Cannon I added a second Riptide and the Ion Cannon on the aforementioned Barracuda.  Not only did I now have 4 large blasts to throw at the enemy it also gave me longer ranged weapons.  With rail weapons not used I lot of my army was 36" range (or less), these 4 Ion weapons had a 60" range, meaning it was less likely that the pesky Eldar could out deploy me so bad that I had a totally ineffective 1st turn, giving them both the early alpha strike and last turn to objective grab.

Baring in mind that the tournament had comp that disallowed 3 of the same unit in a non troop force organisation slot here's what I came up with for my first tournament (1800 pts) outting:

I faced Eldar for my first game with some usual toys, Farseer, Spiritseer with Wraithguard in a Wave Serpent, Wraithknight, Warp Spiders, Dire Avengers, Support Battery, War Walkers.  I followed this with a game against Necrons with Wraiths, Scarabs, Tomb Scorpions, Annihiliation Barge, Warriors in a Ghost Ark, Warriors in a Nightscythe & a Warrior blog with an Overlord, Monolith.

Finally I faced Dark Eldar for the last game of the tournament sporting the Duke with Trurborn with lots of poison shots (24 between the 8 models when on the move) in a Raider, Warriors in a Raider, Wyches in a Venom, Warriors on foot with a Dark Lance accompanied by a Haemonculus, Incubi in a Venom, Wracks on foot with a Haemonculus with a Hex Rifle, Ravager, Razorwing.

Brief battle summaries, and key learnings I took from each game will follow, but in the meantime here's some pics of my army taken at 6:30 the morning of the tournament.  You'll see I didn't have time to wait for the Riptide, Barracuda and Broadsides bases to dry so I could add flock, yep that's right I pulled an all-nighter to get the army done, so I went to the tournament with no sleep, no breakfast and only some energy drinks to keep me going :)

Let me know what you think of my list, and how you think I would get on ? 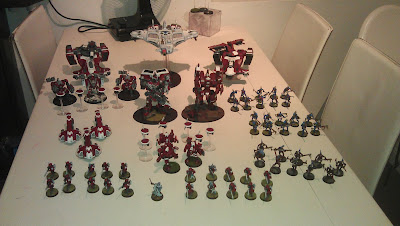 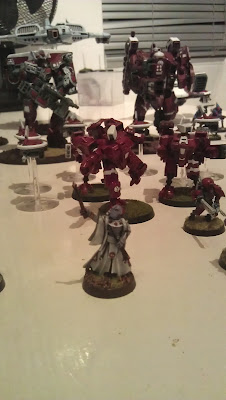 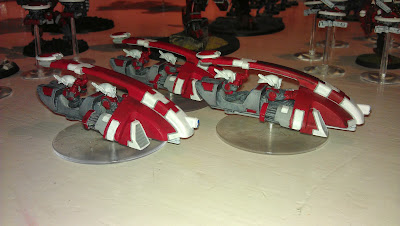 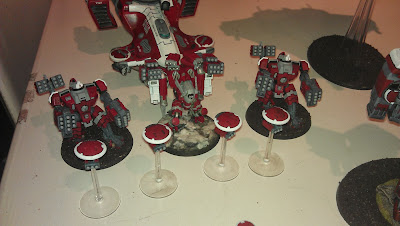