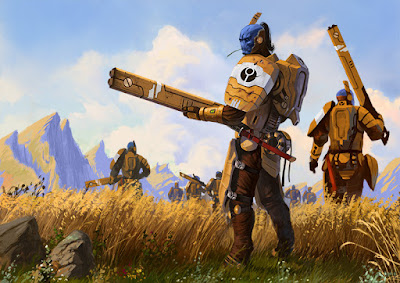 Note: This post was originally started in November, and since then I've been waiting for the controversy about the Coordinated Firepower rule to settle down.  Well now it is time to finish this part of the post, and put my thoughts on the Coordinated Firepower rule in a seperate post where I can do it justice - not the rule itself, but the options on how it could be played and Tournament Organisers could rule it.

In a previous post I said I was amased that there was going to be practically no changes to the stats, weapons and options of the Tau units which did not have a new release.  This lead me to stupidily think there would be little change in how competitive the Tau army would be, and that there would be many new units being used in Tau units.

Well I still think that there will be little change to the units seen on the tabletop for Tau armies, it'll be the same as before with the addition of the Stormsurge (see below for my change of heart) and the Ghostkeel (again I'll explain further down why).  Breacher teams will be seem briefly until most people see that a 5" range (the only range it's better than a pulse rifle armed fire warrior) combined with a overpriced devilfish to get them into range is not that effective. 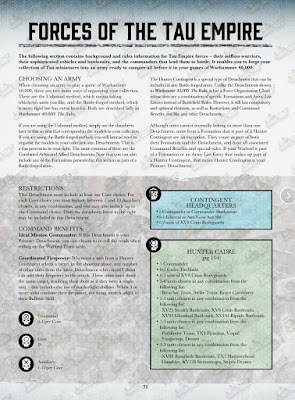 The thing that jumps out is the Coordinated Firepower rule:

I think the biggest thing this rules shows is that GW doesn't playtest any rules in any depth.  Any casual Tau play immediately looks at the Coordinated Firepower rule and thinks, a nice fluffy rule that really helps against deathstars and must be used carefully not cause overkill and waste firepower, but then in seconds will think "hang on a second, have that thought this through", when they consider all the rule interactions and wargear that was point costed when they could affect only one (in most cases a specific) unit and now could affect multiple units under the coordinted firepower rule.

Now the rule (to me anyway) quite clear, most most people (myself included) thought GW would no doubt GW will FAQ it, as they couldn't have considered all the implications.  However to our surprise GW has been silent on the matter, and the closest thing is an e-mail from GW saying that the rule would not be FAQed because they meant exactly what the rule said.

Link to Facebook showing reply from GW: here
and the same from Imgur: here

Rather than discuss the Coordinated Firepower rule here, I'm going to leave it to another post (not to soon, as I promised a tournament organiser I would spell out the issues and options for his tournament).  Instead I will highlight the top formtions, just my opinion, that the Tau can now take (in no particular order).

"Mark a target and we will wipe it out"

Although this was a quote from the Skyray in Dawn of War I think it's a good for what I believe was the only Tau formation we previously had and the one I believe will still be a popular with the new codex (although it will get a lot of competition now); The Firebase Support Cadre: 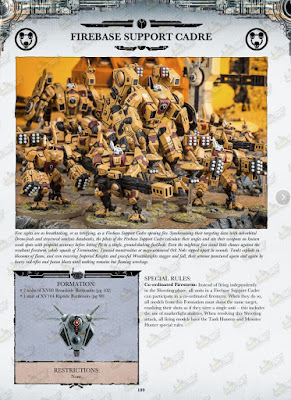 This formation consists of a (unit of) Riptide(s) and two units of Broadsides (any size now).  The formation, compared to before, and been both nerfed and buffed.  Before  the formation got Tank Hunter and Prefered Enemy (Space Marines) innately.  Now they do not get Prefered Enemy at all and the formaton all has to fire at the same target to get Tank Hunter.  On the plus side the broadside units do not have to have the maxiumum of 3 broadsides in the team, meaning this formation does not have to be as many points as it was before.  The formation is also careful to say that all "models" have to fire at the same target unit (rather the all units have to) to get the formation benefits so target locks can not get round this.  A second nice bonus is that when the units fire together at the same target they get monster hunter as well as tank hunter, meaning the targets that the formation is very good against has expanded, partiularly when Wraithknights and Guargantuan Bloodthirsters are around.

Overall the changes are definitely a nerf compared to the previous formation, however I think it will still be popular because it gives a second access to Tank Hunter, and now Monster Hunter (the first being the Puretide Engram Chip signature system available to Commanders, and Crisis Suit Shas'vres).

At decent range the Tau have alot of str 5 and str 7 shooting, but at that range they struggle with the weaponry to kill av13 and av14 or T8 Wraithknights.  Before I used the Firebase Support Cadre to allow me to deal with av13, with so many str7 shots from the broadsides they could take out av13 targets like Imperial Knights, and luckily av14 targets were rare.

Without massed Sniper Drone and Broadside firepower boosted by Monster Hunter (and in the case of Sniper Drones also boosted by the Ethereal's Storm of Fire ability)  I think there's only one way to effectively deal with Wraithkights and other high toughness Guargantuan creatures, and thats a Stormsurge with markerlights making the destroyer missiles str D (that's the game changer that was not in the Wgite Dwarf preview that has changed my mind on Stormsurges).  Some people will take the Stormsurge route, but for those that don't I highly recommend the Tank Hunter and Monster Hunter available from the Firebase Support Cadre (along with the Puretide Engram Chip). 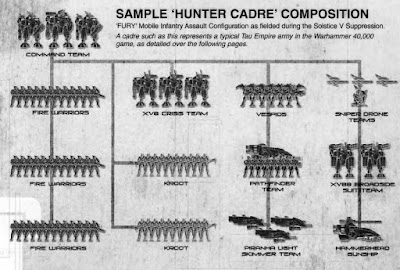 It's best to think of the formation as a slightly more onerous CAD, with a fixed HQ option.  The requirments are:
1 Commander
0-1 Cadre Fireblade
1-3 Elites
3-6 Troops
1-3 Fast Attack (excluding the flyers)
1-3 Heavy Support ot Lords of War (excluding Skyrays)

Notable exceptions are the remaining HQ choices, eg. no Ethereals or Darkstrider, unless you have a seperate CAD, no forgeworld, and no (non formation) fotifications.  Darkstider will not been seen unless you play that if he joins a unit that his part of the Hunter Contingent his structural analyser works on all the units that are part of a Coordinated Firepower.  Ethereals can be included in your army in one of three ways;
The Hunter Cadre is so flexible that it is easy to convert any old codex list into the Huntre Cadre as it plays like a slighter larger CAD.  However there is a sizable minimum points cost to the formation, which may become an issue if you want to fit in a number of other formations.  For example if you want to use the Firebase Support Cadre you may not want another Elite or more Heavy Support choices.  This is particularly an issue if you want to play the Retailiation Cadre (which includes 3 crisis suit units, a broadside unit, a riptide unit and a commander).

Some of the Tau formations are so good, that an argument could be made for just taking the formations and not bothering with the Hunter Cadre, or just taking a very small CAD (which also has the benefit of having Objective Secured) for a much smaller points cost, allowing more points to be spent on the good formations.  If you took the Retailiation Cadre, Firebase Support Cadre and the Optimsed Stealth Cadre that could be a fluffy suit based army in itself that also has very additional formation good rules, that can be built to deal with any enemy force.

The main benefits of the Hunter Cadre is ok (units can give supporting fire within 12", and can run and fire if close to the commander or cadre fireblade), but in many cases these benefits are not as good as some of the benefits in the other formations.

The Coordiated Firepower rules makes markerlights much more effective, as they can affect multiple units, however if your army is less depenent on marker lights, and/or has large powerful units (which will ovekill units if they combined firepower) then you could be best not using the Hunter Contingent.  Another benefit of the Coordinated Firepower rules is the +1 BS if 3 or more units combine fire but if your formation already gives you extra BS (eg. the Optimsed Stealth Cadre) or gives twin-linked, you may not need the Coordinated Firepower rule as much.

My current army has lots of units, and most of them are in the 80-150 points region, so I know combining 3-5 of them will not kill a unit of marines, so I could do with the +1 BS and more efficient use of marker lights, so I will take the Hunter Cadre because I want to use the Hunter Contngent rules, not for the formation in itself.

In time as I buy more models and experiment with Stormsurges, units of multiple Ghostkeels, and some of the bigger formations I may not need the Coordinated Firepower rule as much, and therefore I would forgo the Hunter Cadre to spend more points of the formations I do want.

That's all for now, next post I wlll look into the best (imho) of the new formations.

What's your opinion on the Hunter Cadre and the Firebase Support Cadre ?  Do you use them, and what do think of the competition they face from the other formations ?

PS.  I little gem I found while researching this article is a formation compendium located on the Blood of Kittens website (link here).  It has a record of all legal formations and is a great resouce
Posted by Rathstar at 00:56 No comments: