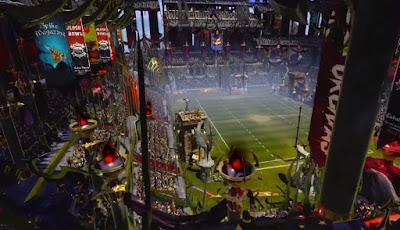 One of the big benefits of playing multiple races / teams / factions in what ever game you play is that you get to use different playstyles.  You can only understand how an opponent is likely to play until you spend some time in their shoes, and although watching battle reports and talking with other players can help a lot, nothing is as great as playing the other armies/teams themselves.

However one danger is that you may bring across playstyles and tactics that don't really fit you new army/team or are hard to implement.  I recent example for me was playing my new Norse after almost exclusively playing Skaven for so long.

This was amplified by recently playing against the Bloodbowl 2 AI for too many games.  I mentioned last post that the poor AI can make a poorer player overtime, and my Skaven tactics were still working when I played Norse against the AI in most games.  Most importantly that the AI does not always protect the ball carrier well, making it easy to threaten.

It was a rude awakening in a recent game playing against Choas Dwarves, aided by some initial bad luck.  I kicked to the Chaos Dwarves instead of receiving.  The Chaos Dwarves had induced a chainsword wielding psycho, so I blitzed it with my Yhetee on my turn 1, however I failed to break its armour (even with the +3 bonus from the chainsword), so he promptly stood and sent my Yhetee straight to the knocked out box.  The game went downhill fast from there :(

So hoping to play a nice team to recover, I give you the match report from my Norse's next game:

The Corona Rosarum (Wood Elves) are continuing their start to the league.  So far Komplex (Slann) have a firm hold on the end of season Elf Bullshit (tm) Award, but Corona Rosarum are hoping to be in contention for the award.  So it was exciting to see the two sides face off against each other.  There was much dodging, leaping and pirouetting (I kid you not !!) by both teams, but overall I feel there was far too much ball handling for my liking.

After their last game the Asgard Sabretooths and theChaos Dwarves thought they'd have rest before playing another bashy team, but the fans braying for more bloodshed , man handled both teams into a nearby stadium, locked the doors and demanded CARNAGE !!

A quick recap from last game is that the Asgard Sabretooths had their strongest (non-big guy) player out for the next match, and Thor (the Norse Berserker) is DEAD.  After having such a one sided easy win the Chaos Dwarves suffered no casualties and had loads of money, so after some deliberation decided to buy a Bull Centaur to replace one that died in their first game.  The Asgard Sabretooths wary of losing more players bought the services of an Apo.

18,000 Fans packed the stadium, with the Asgard fans outnumbering the Chaos Dwarves 11 to 7, but the Chaos Dwarf fans had some taunting posters:

The Chaos Dwarves did not have any inducements this game so had 11 players (2 of which were str4), but no reserves or Apoc which could be risky.  The Asgard Sabretooths had 2 journeymen, and had induced a mercenary lineman (well there's the line of scrimmage taken care of) to give them 12 players, one of which was str5.

The Asgard Sabretooths won the toss, and learning from the last game decided to receive.  90% of the time the coach would kick when running a skaven team, but the Norse has neither the speed or the agility to pressure the ball carrier like the Skaven can so this doesn't work for them.  The coach decided not to play like skaven this game (it worked so well last game) and take full advantage of hitting first.

The Chaos Dwarf team got a Perfect defense (kick off event), so was able to mitigate the aggressive Norse set-up by putting 3 guys on just one side of the line of scrimmage, and weighting the same side as the ball had scattered up towards the middle line and off to one side (the side the Chaos Dwarves weighted).

The Asgard Sabretooths concentrated on the hobgoblins in range, and knocked down most dwarves on the line of scrimmage.  Turn 2 a runner picked up the ball, then did a throw to a lineman who ran it to the other flank to safety.  The Asgard's quickly took a Bull Centaur out of the match, and now having the ball safe, put linemen against the other Bull Centaur to slow him down and stop him joining the action.

Frenzied Blitzing enabled a chain push to take a prone hobgoblin off the pitch and the crowd made sure he would play no further part in this game.  The mercenary linemen even got in on the act, when a turnover block from a dwarf, allowed the linemen to put another model in the dead and injured box.

The Asgard Sabretooths advanced the loose cage down the pitch and eventually handed the ball off to the Berserker (using the last reroll of the half) who walked in the ball in turn 8.

With 3 players in the dead and injured box the Chaos Dwarves were down to 8 players on the pitch , while the Asgard Sabretooths had their full 12 man squad untouched.

In the Chaos Dwarf turn 8 they got a completion with a hobgoblin, but didn't do any permanent damage to the Norse, and were tempted to foul but being so low on players and following the advice of other coaches the Chaos Dwarves ended the half and waited for the Norse to set-up to kick at the start of the second half.

With player advantage the Norse set-up aggressively again.  A high kick allowed one of the hobgoblins to move under the ball, but a failed catch and then a early turnover put the ball at risk but the hobgoblin removed with a gutsy move involving a 2nd completion*.  However things got worse when the Norse quickly got a 4th casualty.  The 4 players out for the match included a str4 Bull Centaur and 2 of the 4 hobgoblins, hampering the Chaos Dwarf's speed, bashing power and ball handling skills all at once.

The numbers were too far against the Chaos Dwarves and the Norse soon had the ball.  In an act of revenge for the previous match, a Chaos Dwarf Blocker was killed towards the end of the second half, making the final casualty count 5-0 (abiet the crowd did one, and the mercenary did another).

The Norse scored turn 7, and the Chaos Dwarves could only manage a 3rd completion (by the same hobgoblin) at the end of the second half.

Well it was Asgard Sabretooths who walked away with the spoils this time, and the spectators can't wait for a rematch, although I think both teams could do with playing other teams before continuing their rivalry.

The final drive of the match:

The Asgard Sabretooths got 70k winnings, and with their 20k treasury were able to buy back the Berserker that died in the previous game, and with the Ulfwerenar returning back to the team, they'll be back to their original roster (but with a couple of -1 Move injuries).  The Berserker scored both touchdowns this game along with a casualty and got the new skill Mighty Blow, while the Runner got the MVP and along with his casualty got the skill Dodge.

My team was up to a respectable 116, next purchase would be extra linemen and/or a 2nd Ulfwerenar.

In other team development news I converted 2 star players in preparation for playing the teams doing better in the league.  One is a star player thrower (that I may use as a thrower in the rare occassion I may want to use one), while the other is a dual wielding axeman which I will use to represent a chainsword guy: 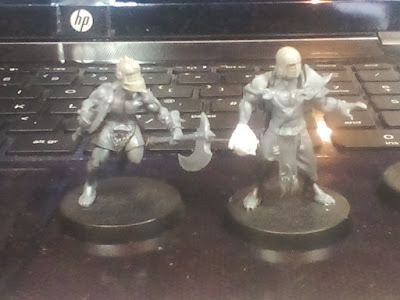 I used some helmets I had around for an Elf team conversion I was planning, used an extra axe from the Silver Tower Darkoath Chieftain (that I previously used for my Ulfwerenar).  I also used a third party hand with a bloodbowl for the thrower along with cutting the left hand off at the wrist so I could rotate it 90 degrees.

Here's hopeing for a steady progression with the Norse, and not too many deaths, going forward :)

Until next time, may Niffle bless your dice.

PS. In an attempt to me to paint and play more 40k I have signed myself up to a tournament in March, and another mate is interesting in dipping his toe back in 40k, so has suggested we attend a local small tournament in May.  Its already started to work for I have cleaned, converted/assembled and undercoated 3 girls you definitely don't want to look at you the wrong way :)  Internet cookie if you guess which unit I'll be painting up !  A WIP post will be coming soon.
Posted by Rathstar at 13:09 3 comments: