After proxying my EotBS fleet with my mates Prussians I finaly got my ships in the post: 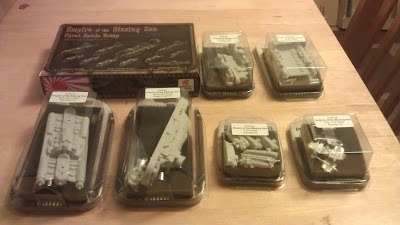 My first impressions were that they were very good value for money, and some of the ships, particularly the dreadnought and the sky fortress were bigger than I expected considering the price.

I got 3 cruisers in the starter box, and I had bought 3 more.  Although I could use them as two squadrons of 3, a full squadron is 4 models, and I was unlikely to buy more so I could use two full squadrons.  Therefore I thought two cruisers would be perfect models to try out some paint scheme ideas I had.

Taking the cruisers out of their blister I was impressed with the detail on the models:

Resin models normally have more flash (well that's what I've experienced with GW forgeworld models), however with these models the flash was very minor, with only a slight amount near the prow, which will be easyily filed off.  You can see the slight flash at the front of the models: 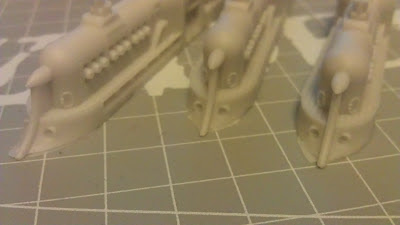 Tomorrow I will quickly cut and/or file this flash off, and then clean the models with an old toothbrush and slightly warm water (definetely not hot, I don't want to warp my cruisers).  If the weather holds out I may even get the chance to undercoat them.

PS. My first Dystopian Wars battlereport will be coming shortly.


Well at last Games Workshop has put up a 6th Edition teaser:
http://www.games-workshop.com/gws/wnt/blog.jsp?pid=2700048

The 23rd June is probably the pre order date, with the actual release being 2 weeks later.

Update: I've had it confirmed that the 23rd is the preorder date.

I'll be spending my birthday money early this year :)
Excited, bored of all the hype, looking for to a shake up of the game; comment away below.
Rathstar 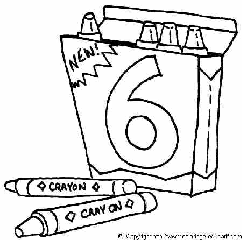 Posted by Rathstar at 09:56 No comments:

Email ThisBlogThis!Share to TwitterShare to FacebookShare to Pinterest
Labels: 40k

Friends introduce me to a new game...

It's been a fun couple of weeks, however before I dive into the main subject of this post I wanted to give a quick update on my Dark Eldar.

I went to a 40k tournament in Tolworth last weekend, which was very enjoyable, and gave me the chance to try out my new 1750 point list..  I came 4th out of 26th, and my Dark Eldar put in a good performance, which included a strong win against Necrons, tabling the Dark Eldar player who came 2nd and losing narrowly to Deathwing.  A further blog post will follow on that.

The main point of this post is that my friends have convinced me to start up a new game.  It just happened that a friend mentioned he had the game, another friend then said he had some models as well, both shortly after I had seen a post about the game on the Sons of Sanguinius blog.  This new game is: 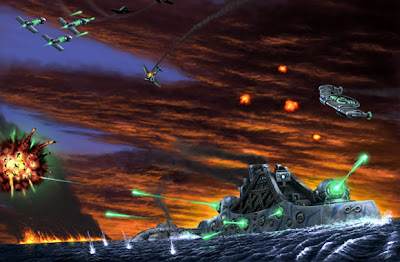 One of my mates had both the original version 1.0, and the updated version 1.1 rulebooks.  He gave me the 1.0 rulebook, so with a free download from the Spartan Games website i was updated to the current version 1.1 of the ruleset.

Looking through the fluff and models I narrowed my choice of fleet to Empire of the Blazing Sun (EotBS) or the Covenant of Antarctica (CoA):

VS
I like both sets of models (especially the CoA's bombers), however I was worried that the elite background of the Cof A wouldn't suit my natural playstyle.  However after finding out another mate who recently bought some models already had Covenant of Antarctica made my choice easy; Empire of the Blazing Sun it was.

I looked round the web for the best prices.  10% with free P&P was easy to find from webstores and ebay Buy-It-Now auctions, however Triple Helix Wargames won out with 20% off RRP plus free P&P.  However it's always worth waiting for ebay normal auctions, and I was able to pick up the EotBS naval starter set of £21 (£32.50 RRP): 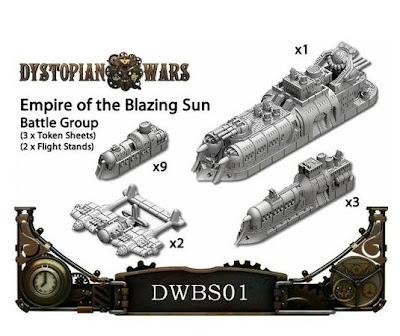 Winning some auctions for a dreadnought, some extra cruisers and bombers put me on £42 for a sizable fleet.  Unfortunately I got a bit carried away because I wanted some of the lovely flyer models and got a Sky Fortress (a flying aircraft carrier) and a War Gyro (the equivialnt of a flying battleship), plus some small Covettes to give me some options in my small ships.

I've made up a 1500 point force to play a mate this Sunday.  We'll probably play some much smaller battles to get a better grasp of the rules, before using out 1500 points forces.  I think my force has a bit of everything so should be good to learn the game with. Even if it's the the cruisers are as bad as I keep reading on every blog and forum :)

Regarding tactics I'm almost flying blind here, with no actual battle experience, however I have been scouring blogs and the Spartan Games forum.  From playing Battlefleet Gothic I know watching my approach angles to get the maximum firepower out of the various arcs on my ships will help.  Also looking at the rulebook it appears (to me anyway) that the EotBS has a strength in their tiny torpedo armed flyers (whose torpedoes are harder to stop), and incendiary rockets (which can cause fires to cause extra damage).  Bombs also seems quite good against capital ships (but obviously require me to get up close and personal with said capital ship).

Lastly using my small Corvettes and Frigates to strip away the opponents small ships and flyers who screen/protect the big ships will weaken the protection near big battleships/dreadnaughts hopefully leaving them weak in either anti air (rockets/bombers) or anti torpedoes.

I'm really looking forward to playing the game, as the mechanics seems simple, but everything can't be good at everything because of the number of ways to target ships; basic gunnery, torpedoes, rockets, short ranged anti air etc., so everything has a weakness.

I'll let you know how accurate my early guesses are, and how I get on at the weekend in a later post.  Below is the 1500 point fleet I hope to try out, and I'm looking at images on the web to give me inspiration for a paint scheme. There's a good gallary on the Spartan Games website, but just putting Empire of the Blazing Sun or Dystopian Wars into google and selecting images gives loads of inspiration.

Do you play Dystopian Wars ?  What do you think of the different fleets ?