After leaving it much to late to start painting the extra models I needed for my Space Wolves I started on Monday evening, and 4 evenings (followed by very little sleep) later I have got the army up to table top critera (minus 13 bases I have to flock tonight round my mates house near the tournament venue).

Now the army is getting sizeable  after the tournament will be the time to go back over the army to bring them up to a decent standard, giving extra details (such as the helmet grill etc.) and adding more highlighting.  Below is a pic of the whole army:


I think the addition of hounds makes the army look quite large for an MEQ army.  Facing 39 models in 666 pts should hopefully look daunting for my opponents.

It's a bit annoying with the hounds.  6 were on square bases so I've carefully clipped them off their original bases and put them on new round ones.  However if I had time I'd like to rebase them all in the same snow scheme as the grey hunters and thunderwolves, but with 13 bases to do tonight I don't really want to add rebasing 6 more models to the list.  I will probably go with a comprimise of basing the 6 new hounds the same as the existing ones, but then adding some snow flock to the base and painting the edge of the base grey, so it matches the rest of the army better.  That's the issue with leaving things so late.

Now with a long train journey, and basing to do tonight, I hope I'm not so tired that it affects my performance on Saturday.  Things I'm hoping to understand better after the tournament is whether the close comat thunderwolves and hounds are ok in the shooting environment of 6th edition, and whether the grey hunters operate ok without wolf guard and rhinos - what's your thoughts and experience on this ?

My last post showed I was dithering about my final list for this year's Sin6 tournament which is later this month.

As usually happens I considered all the options I was dithering over and went "Sod it, I'm going to try something new".  In reality I decided that having a sizeable long fang unit or a big unit of 4 thunderwolf cavalry was probably putting too many eggs in one basket.  I was also still worrying about tzeentch daemons who, with their screamers and flamers, invalidate a lot of the marine advantages (good toughness and armour save).

My idea was to add some cheap attacks into the list, and that was through adding in fenrisian wolves.  By cutting all the other units down slightly (and removing the quad gun) I was able to come up with the following list:

Of course rewriting a list less than 10 minutes before the submission deadline has it's risks, particularly when I have only used fenrisian wolves once (about half a year ago).  In this case, can you guess which special rules affecting fenrisian wolves that I remembered the wrong way round ?  The error does leave a big weakness in the list, and I would definitely would have changed the list slightly to mitigate the weakness.

Let me know what you think of the final list.

I just hope it stops snowing so I can undercoat some models tonight :) 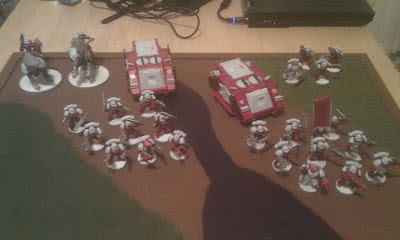 For those of you that have been reading my blog for a while you may remember the army above that I took to Magnificent Seven, a 600 point tournament last January.

Well the tournament has come round again (it's in 2 weeks this Saturday), and I've decided to take my Space Wolves again, especially as it will force me to paint more of them.

2 Thunderwolf Cavalry, one with a Frost Blade - 125

This year the tournament had increased to 666 points, so I had extra points to spend.  I also wanted to try out a fully foot list, in preparation for my current theory-hammered list, which used Guard allies, with only two vehicles (a Whirlwind and a Vendetta) - I know nothing radical as quite a few people have similar lists.

The tournament allowed lists to have a single flyer, and units were allowed to buy a fortification gun without taking the fortification.  So taking units out of my main list I came up with this new list for 2013:

It's a good basic list to try out.  The tournament has a bonus point if you can make your list exactly 666 pts, but as all the options for the units I've taken are in multiples of 5, the only I would be able to do that would be if I rewrote the list to have wolf guard in it, which I don't think is worth it for 1 extra tournament point.  Wolf Guard storm bolters are one of (if not the only) upgrades which isn't a multiple of 5.

I'm still dithering over going all foot.  Rhinos will allow the grey hunters and the thunderwolves to be in the opponents deployment zone all together on turn 2, plus the steel box of a rhino is a good way for the grey hunters to get the alpha strike (of alpha rapid fire shot) at units such as screamers or flamers.  Maybe I'm just worried about daemons too much :)

Thunderwolves are improved in 6th edition, so I'm considering losing 2 missile launchers to get a 4th model.  The reduced long fangs can still thow out 2 missile launcher and 4 twin-linked str 7 shots a turn.  Deploying them far back defensively will help to offset their fragility from being so small a unit.

Also are meltaguns needed in 6th, when only combat patrol vehicles will be allowed and everyone has krak grenades.  I picked meltaguns in the squad with the standard because it's an assault weapon so I would fire it and assault, but would 2 flamers be better ?

Well I have until tomorrow night to submit my list, so any suggestions on the points I'm pondering, or anything in general about the list would be appreciated.  Now I have to start painting like crazy to get the few extra models I need assembled and painted in time :)

For those interested below is my 1750 point Wolves / Guard list I'm building towards.  It's nothing unusual compared to other SW/IG lists I've seen:

* Intention is to go in one big blob, joined by the Runepriest for ATSKNF and the Primis Psyker.  In some games squad 4 may not join the blob, and instead sit on a backfield objective.  When together the blob and 2 psykers have 3 autocannons, 5 poweraxes, and a sacrifical sergaent who no upgrades to throw himself in front of any nasty characters, and most importantly another 30 bullet catchers.

Posted by Rathstar at 17:10 No comments: 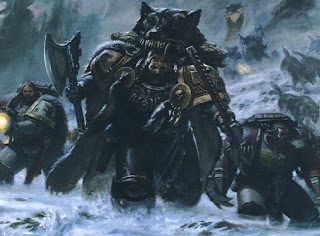 After my heavy tournament schedule in Oct and Nov I haven't touched any of my 40k armies since then.  Everyone needs a bit of time away :)  I have played 3 Dystopian Wars games (but more about that in a later post), and I've come up with a new Dark Eldar list to test in 2013 (after a shocking slaughter at the hands of necrons in the one 40k game I have got in during the last 2 months).

However today my son wanted to do some painting so it was a perfect excuse to do a quick conversion on the opposite side of the table.  A while ago I got the Dark Vengeance Libby because I liked to pose with the outstretched arm.

The chest and loin cloth is one piece and glues straight onto the body and head section, while the sword arm is seperate with just a small pipe shaped bit of plastic for the sword arm to slide on to.  I made a new arm, using a generic pistol arm and a forge world axe.  I then had to drill a hole (using the large drill bit) at the diagonal angle to match angel of the bit the arm had to attach to.  The hole went from where the shoulder attached down the arm towards the wrist.

I tried cutting off the Dark Angels symbol from the chest, but as it's not flat that didn't work, so later I will obscure the symbol with green stuff.

Now, because I took the little extra time to drill a hole in my new arm, and didn't just cut off the bit the existing arm slotted onto, I can have either a force sword or a force axe for my librarian: 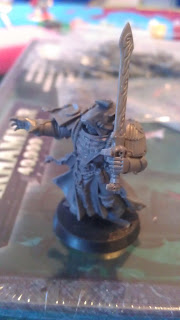 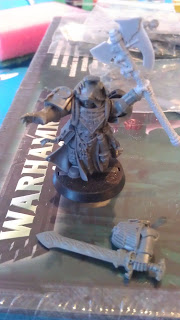 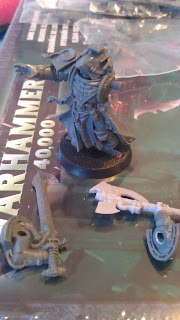 January will see me painting more of my red/blue space wolves as I have a 666 point tournament at the end of the month.

Until next time (which won't be so long of a wait).