So I'm a third of my way through the 10 weeks with one tournament and 4 games under my belt.  As well as getting the 4 tournament games in I'm managed to get in 2 games at my local GW and another 2 against my mates tournament winning Eldar army (also my 1st 2 games of 7th edition).

Last post I left off with the final basing needing to be done on the new models in my army and the models I painted up for the last tournament I went to could do with the basing being improved.  Well I added the flock to the necessary models, however I didn't have time to paint the edge of the bases dark brown, so they were left black:


The 1250 point army list I could be using in the first two games was:
Ethereal with 2 Marker Drones
Crisis Team
Shas'vre that made everyone twin-linked, the drones BS3 and the unit either Tank Hunters of Monster Hunters
2 Shas'ui with 8 Str 7 Ap4 shots between then
6 Marker Drones (with the buffs to get as many makerlight hits as 9 pathfinders)
Fire Warriors
3 units of Kroot (no Sniper rounds)
Firebase Support Cadre consisting off
Riptide with Ion Accelerator & twin Fusion Blaster
2 units of broadsides consisting of 3 broadsides (all the missiles) and 6 missile drones each


A very quick summary of my games were:

I faced a generic marine army with a bit of everything; devs (strangely with heavy bolters), couple of tac squads in rhinos, 2 land speeders (multi-melta & cyclone), libby (iirc).  With the rules of the tournament meaning that the 1250 list couldn't be changed when it increased to 1750 and the fact that the models I wanted to use from the Tau dataslate were over 500 pts meant that I had to squeese them in my 1250 list, however facing marines (the dataslate gets preferred enemy marines) and facing a few light vehicles (the dataslate also gives tank hunters to it's members) it was an immediate uphill struggle for the marines.

I deployed centrally with the landspeeders hiding, the devs were central in ruins and the rhinos tried to pull a refused flank where they could approach behind some ruins.  However the ruins did not completely block line of sight and a crisis unit wreaked one rhino, and the other was wreaked turn 2.  After the landspeeder and devs took the riptide down to 1 wound it shot and charged them to wreak the landspeeders and then did shot of the match with a long shot into some disembarked marines to kill 8 of them with an overcharged ion accelerator blast.

For game 2 the Tau dataslate would do nothing for my army as I wasn't facing marines or any vehicles, as I was against Daemons.

My opponent had (very roughly as the tournament was a while ago):
Belakor
Fateweaver
Tzeentch Daemon Prince with the Grimore (and appeared built for combat)
2 Units of Cultists (Belakor was the HQ of a Choas Space Marine ally detachment)
2 Units of Horrors

I can't remember anything else, however the 3 Flying Monstrous Creatures (FMCs) probably took up around 800 points.

We were playing with the diagonal deployment, and my opponent had first turn.  He deployed aggressively forward (with some ruins and walls in between us) with the 3 FMCs, deployed one unit of cultists while putting the other cultists and both horror units in reserve.

I was considering deploying as far back as possible to create the maximum number of turns before the 3 flying daemons could charge, however from previous experience this has done two things:


Therefore I decided to be ballsy.  I told me opponent I couldn't deploy out of the range of a turn 2 charge so I was going to deploy to seize.  I deployed the broadsides just within 36", with the crisis suits within 42" (6" move plus 36" range).  My Kroot were positioned in front of the whole army trying to ensure a turn 2 charge would be into them rather than giving the FMCs the space to jump over them and charge something juicy.

What helped my decision on the aggressive deployment was there was little else in the Daemon army on the board apart from the 3 FMCs.  This gave my army loads of space to spread out once the game got going.  With the Riptide on one side and the crisis suits on the other I could move out to make it hard for him get to all of the good bits of my army.  I knew he would be staying partially together to use the Grimore.

After a more gutsy than usual deployment the dice gods looked down on me...

Now the centre of the board had pretty good terrain in the form of Gale Force Nine's ruins: 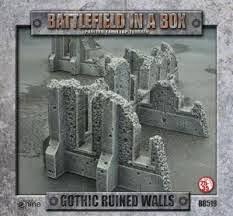 Tip:  When deploying make sure you go down to your models eye view to check line of sight.  It may be shockingly different to what it looks like 3 feet higher up.

This limited my turn 1 firepower, but Fateweaver was clearly visable to a broadside unit and the crisis suit unit so he easily died.  However I couldn't see the Grimore Tzeentch Daemon Prince, but I did take a wound off Belakor.

On the daemon 1st turn the two remaining FMCs flew 36" towards me.  The Grimore was cast on Belakor giving him a 2+ inv save (not rerollable), and Belakor returned the favour by casting Shrouded (& Stealth I think) on the Tzeentch daemon prince.  Belakor then decided to momentarily take over my Riptide and he overcharged the ion cannon and placed a str8 ap2 large blast over three broadsides.  The broadsides were closest to the Riptide and luckily my opponent rolled a 1 on one of the 3 to-wound rolls so only 2 broadsides were instant killed.

The next turn effectively killed the game.  I used the kroot units to rapid fire at Belakor until he failed a gounding test (won't be able to do that in 7th edition) then the untouched broadside unit gave him so many saves to make that he died.

The rest of the army poured their firepower into the Tzeentch Daemon prince.  The twin-linked markerlights allowed another unit to ignore cover, but the good armour save saves most wounds leaving the Tzeentch daemon prince alive.  However because he was so close I was able to move the kroot that was that side to ensure that he couldn't fly over them to charge something else leaving him choice of charging them or swooping over them to charge turn 3.

Tau Tip:  If you don't have skyfire you had better have twin-linked markerlights

Meanwhile the fire warrior unit I put in reserve did a one on one fight with 10 cultists, and having the alpha strike in that fight and having higher strength guns they won that fight over a few turns.

Next turn the Tzeentch daemon prince charged the kroot, and killed most of the unit, and the kroot dutifully broke and were run down.  A unit of horrors deepstriked onto an objective, but not much else happened.

Next turn the daemon prince died and my army started to rush out of my deployment zone to help clean up the horrors (apart from the last broadside that had seen his 2 colleagues die to the Tau's Riptide who stayed to claim an objective (as it was Big Guns Never Tire).


So two bigs wins shot me up to table 1.  On table 1 a lovely Tau army had just won.  The army had a stunning white paint scheme, as was painted by a Jason: 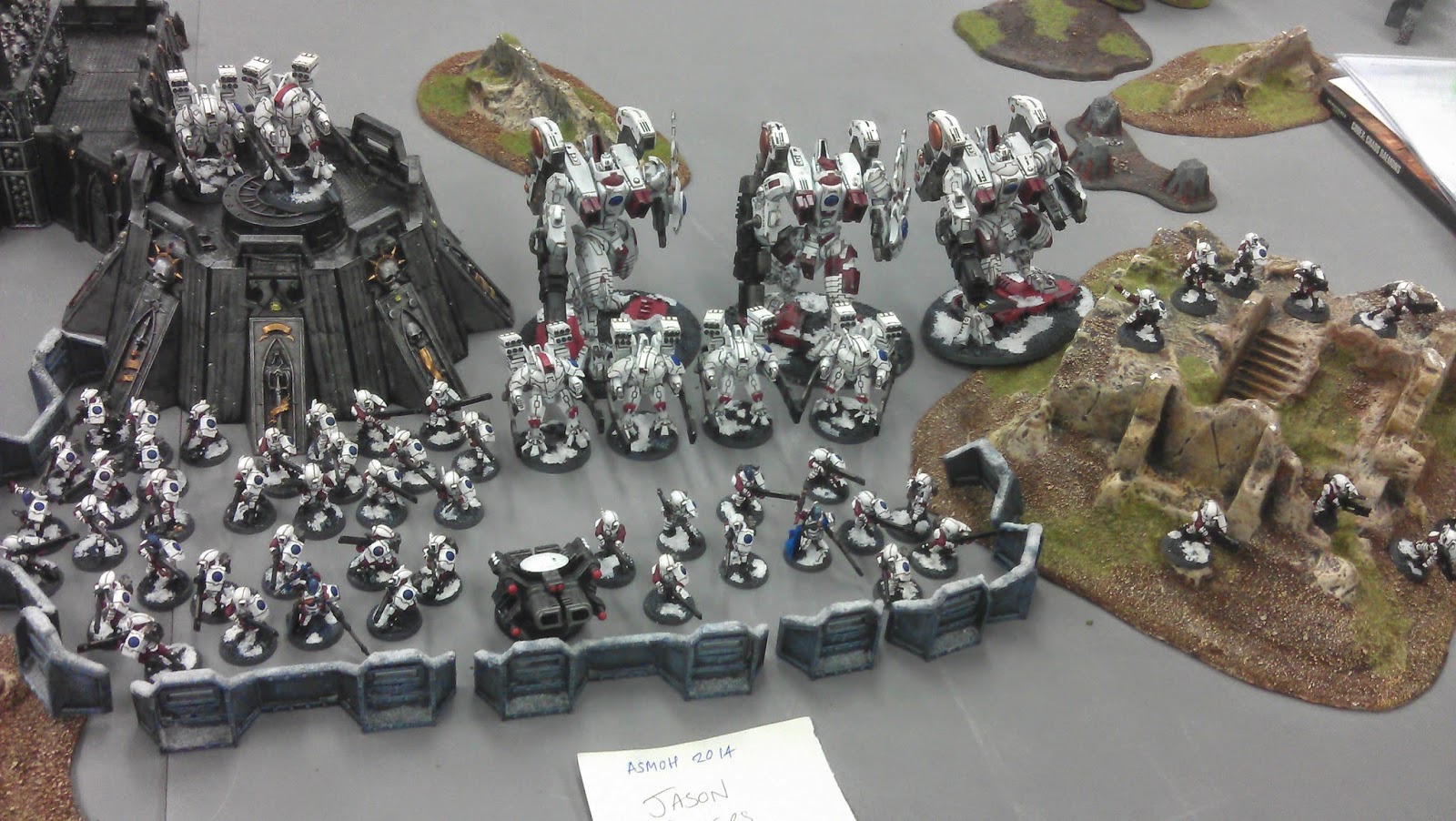 Although Jason's army was all infantry like mine, there were obviously big differences, obviously having 3 Riptides stood out, as did the broadside armament.  Using pathfinders (that I find static and fragile) was also different (although we both used markerlights).

However we never got to face each other as a both myself and a Marine player had leapfrogged Jason onto Table 1.  The last two games would also be played at 1750 points.

This tournament report will be concluded in the next few days, as this post is now quite long.  Look forward to a perfect blend of Wolves, Fists, Inquisition & Forgeworld, followed by more Daemons.  I was now with the Big Boys - could I hold my own ?

Until then i leave you with the screen capture of my commander from when I played Dawn of War - I miss that game, from the Broadsides firepower, the Steaths suits utility, to the forever satisfying enjoyment of unloading a full skyray squadron and watching a whole section of the screen glow bright white from the multiple missile impacts :) 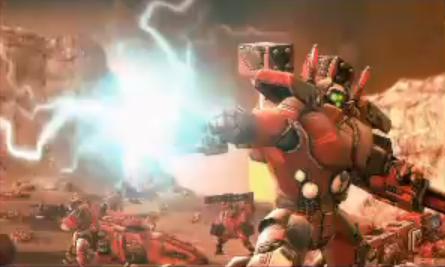 Posted by Rathstar at 01:33 No comments: