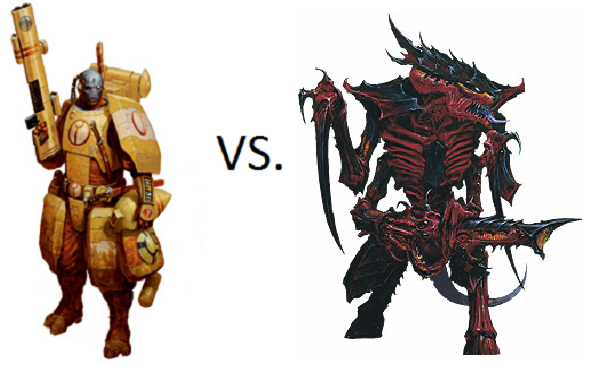 It's been a few months since I last blogged, and unfortunately I haven't got much gaming in, since the tournament in Janruary that I took my Space Wolves to.  A quick review of the tournament is coming, but a quick synopsis is that is was a really fun tournament, but I learnt a lot about my Wolves because they did soooo badly.  What's good though is that I can take the learnings and the models to increase the Wolves from 1250 up to 1750 points are already on the painting table.

Talking of painting table after the January tournament, my painting table was a mix of all the projects I wanted to finish quickly, from the aforementioned additions to my Space Wolves: 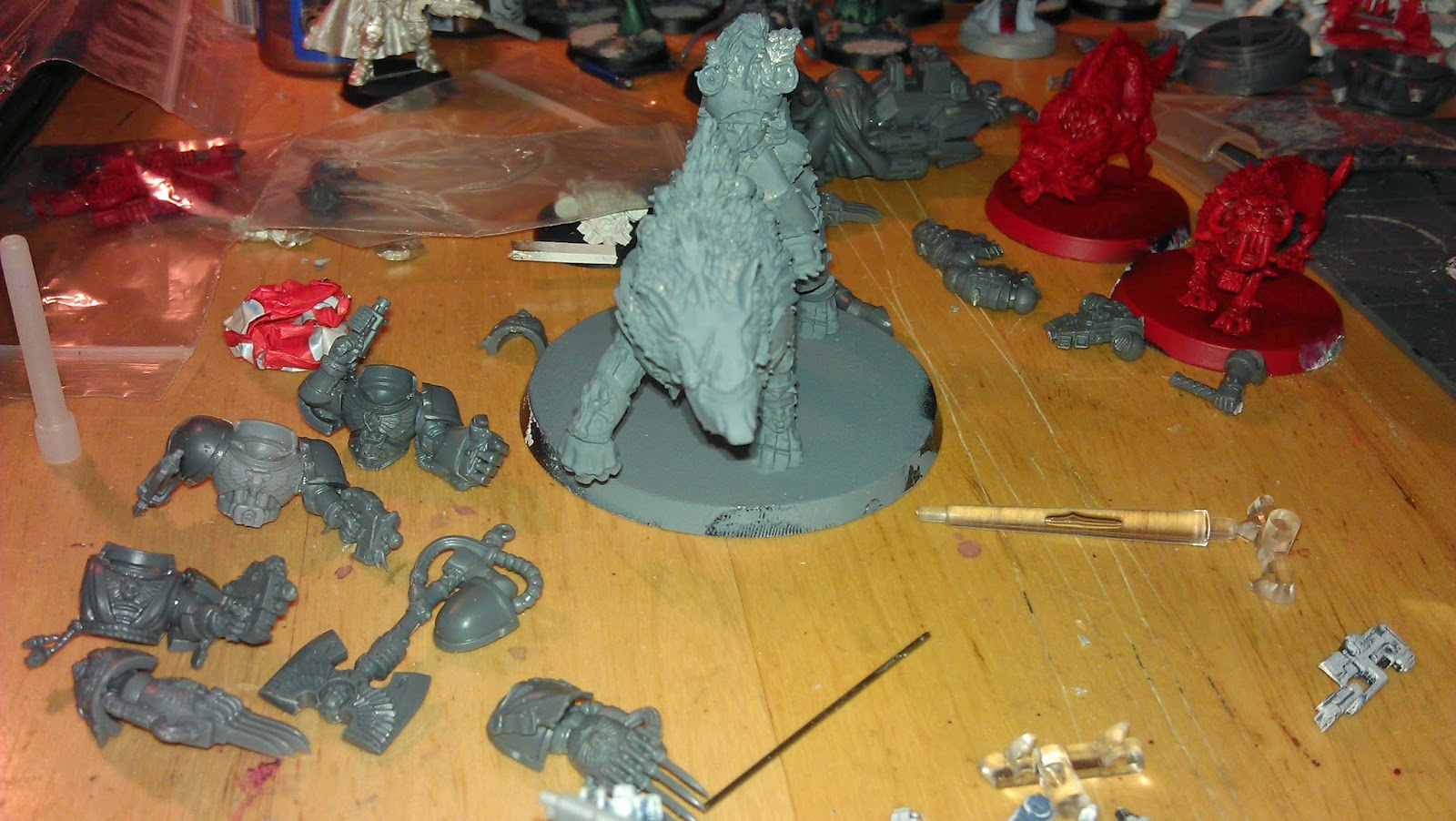 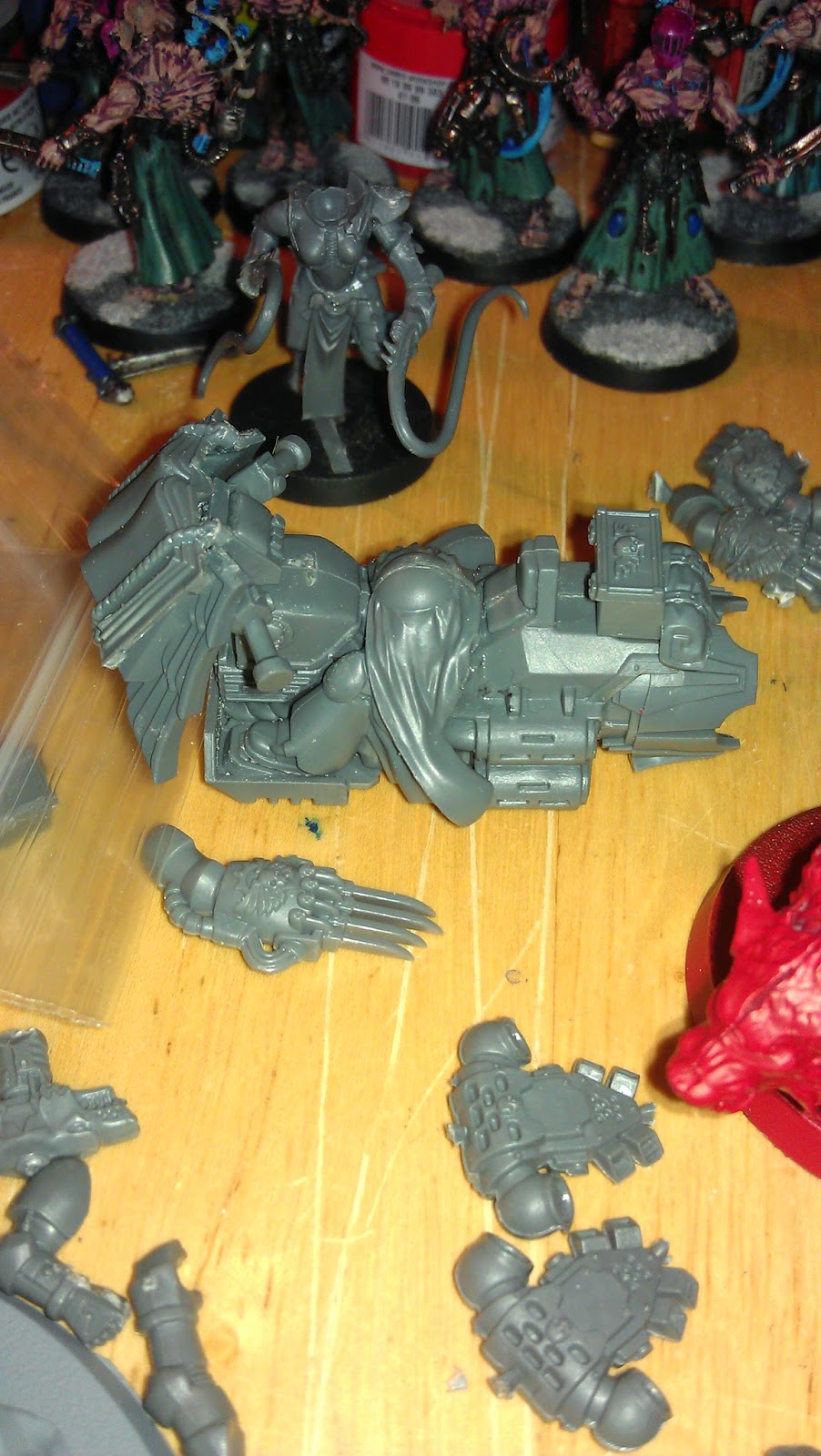 [WIP Jetbike for my Rune Priest, and a WIP Mistress for my Repentia in the background]

a random Scout conversion (based on Telion): 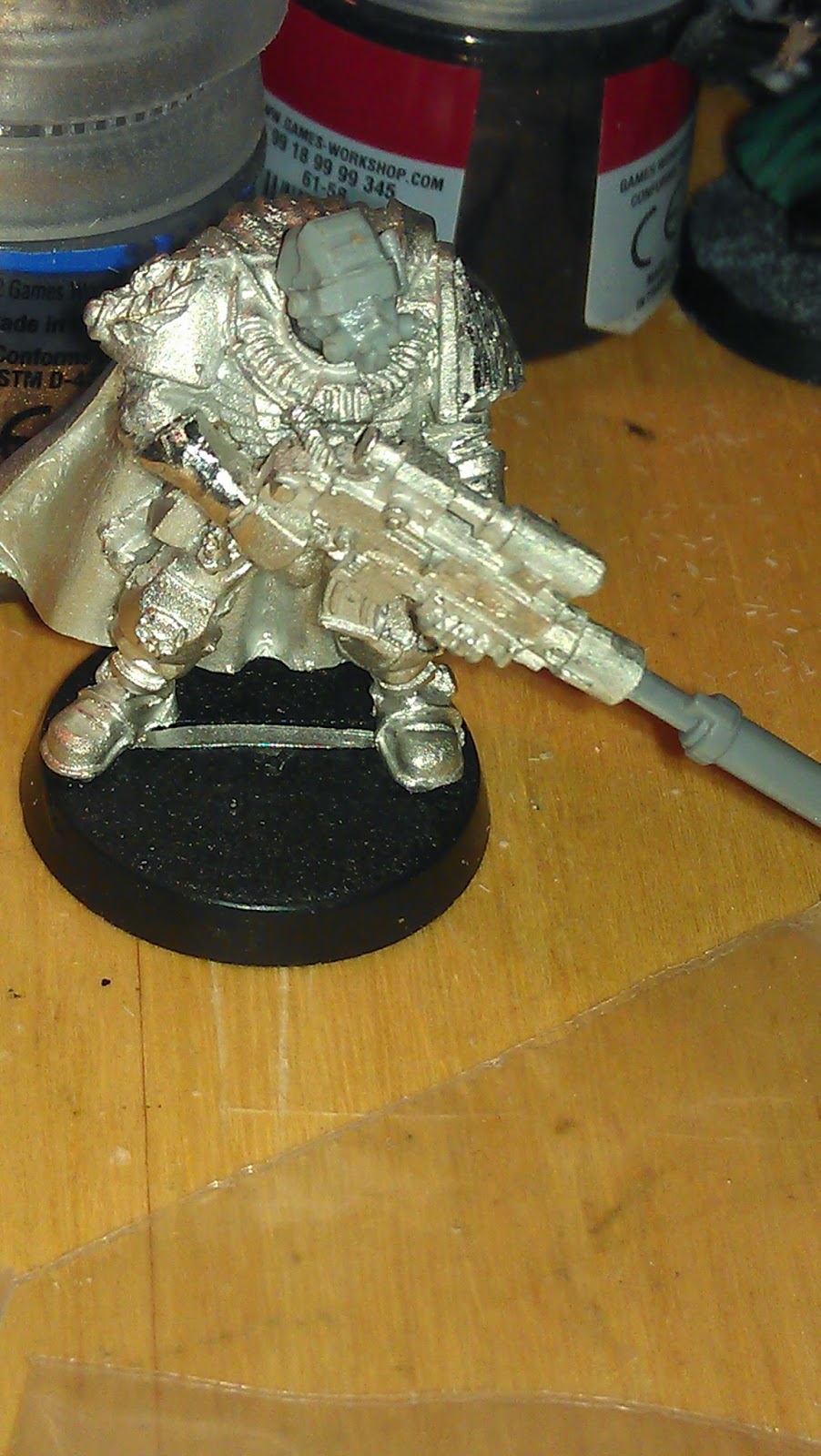 to the the start of the new addition for my Tau: 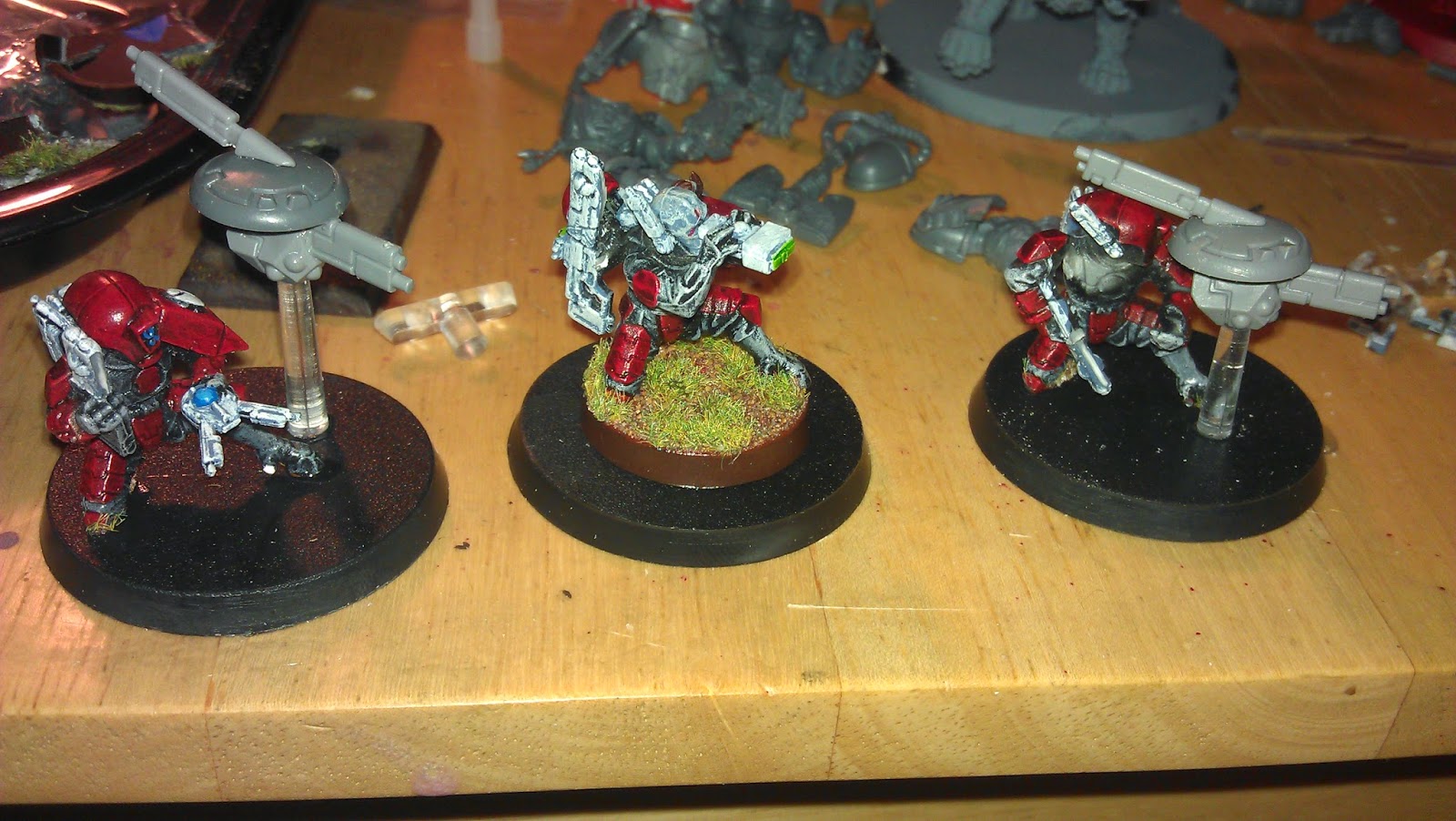 However I've now got a bit more focus with my next tournament booked in for May and the army choosen (Tau), so all other painting projects are on hold until I finish painting the 20 models.

And that brings me onto Geekend !!  My mate that I went to the Janruary tournament said we must book a weekend for him to come down, so the date was set, and it's this weekend.  They'll be 3 of us, with couple of people popping in over the weekend, and over the weekend we hope to fit in:
40k: Tau vs Nids (on a terrain heavy board)
Infinity
Firefly (the board game)
Dystopian Wars
and more Firefly

Part One of the 1st of hopefully a few Geekends this year is a return to the gaming table for my Tau.  On an open table I would think my Tau on paper should have the game easily, but on a terrain heavy table that blocks some decent line of sight it should be a tough fight.

As this is practice for the tournament I'm going to in May we're using dataslates, however the tournament caps flying monstrous creatures at 2, so I won't by facing the Skyblight formations, so instead I get to gave 5 heavy support choices in the form of the Artillery formation.  I'm partically worried about 2 mawlocs and what 3 biovores that can hide out of line of sight will do to my troop choices. 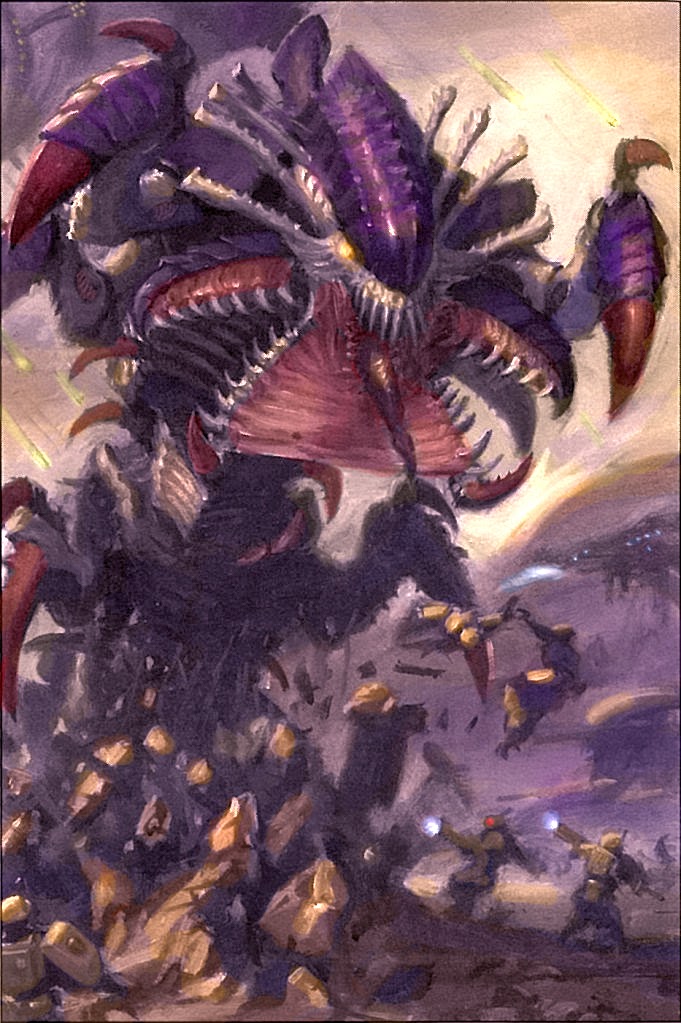 [Hopefully not a portent of things to come]

I'll post up my ideas on Mawloc defence and whether they worked in the game next week, but please chime in with any advice you have.  Below are the armies we'll be using.

Drone Controller (NB: The Firesight Markmen also have these and are BS5) - Other drones in the unit (apart from Missile Drones) use the bearers BS
Posted by Rathstar at 16:07 No comments: