Are Kill Team Gun Drones As Good As They Say 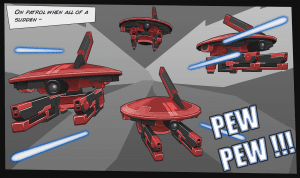 A quick follow up my initial Tau Kill Team post, is taking a closer look at one of the two Tau units thats getting a lot of interest; the Gun Drone.

The main reason the Tau Gun Drone is good, when in 40k it is rarely seem since their points were increased 12, is actually nothing to do with the Gun Drone itself, but comes from the Kill Team rules itself:

This means that the Gun Drone can only effectively have a -1 to hit modifier.  This is huge in a faction that only starts on a 4+ to hit generally.  When most shots are at -1 or -2 to hit, and their are three very common ways to get -1 to hit (Long Range, Obscured Target & Flesh wounds) along with many others (eg. Moving/Advancing with Heavy/Assault weapons, firing at Stealth units) other Tau units can see themselves firing on 6's as well.

Some abilities can give +1 to hit or ignore the obscured penalty, but these will only work on 2-3 models a turn leaving the rest of the Tau army at the mercy of the negative to hit modifiers with no way to buff their to-hit chances.

However Drones have an even worse chance to hit than the rest of the Tau, so lets check whether the extra shots that Gun Drones have offset this poor shooting accuracy.  For comparison lets compare the Gun Drones to two other Pulse firepower units, the Strike Team Fire Warrior with a Pulse Rifle, and Steath Suit with a Burst Cannon.  To even out the comparison for points costs I'm going to compare a single Stealth Suit to 3 Gun Drones and 3 Fire Warrior Shas'la.

The charts below shows the average number of Injury rolls against a MEQ (marine equivalent, ie. T4, 3+ save).  Normally I would also compare against GEQ (Imperial Guardsmen equivalent), but all the rolls are the same apart from the save, so just double the MEQ figures to get the GEQ figures)
The Math 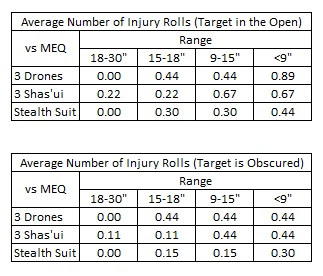 The basic Fire Warrior is going quite well out of this (well comparatively).  It wins with the extra range, although the damage output at 30" is not that great, and even wins against Gun Drones in the 9-15" range, where the Gun Drones is still at long range, but the Fire Warrior is getting 2 shots and not getting the Long Range penalty.  This still holds up when the target is obscured with Gun Drones and Fire Warriors tied when within 15" of the target.

The Stealth suits comes in last, however it has lots of other benefits which I'll talk about later that means it should not be ignored.  If we moved the comparison onto targets with -2 to hit, then the Gun Drone would easily be the best as it's damage output can not get any worse.

The quick conclusion is that Gun Drones are the best firepower unless you are consistantly at greater than 18" away from the enemy, which shouldn't really happen, as in most Kill Team games you can get Gun Drones in range on the first turn (they should even advance, and not hit any worse against a target they already had a -1 to hit against).

However as with any mathhammer, lets look at the only factors that this analysis does not take into account/  Lets first look at benefits of Gun Drones vs Fire Warriors (I'll look at Stealths later): 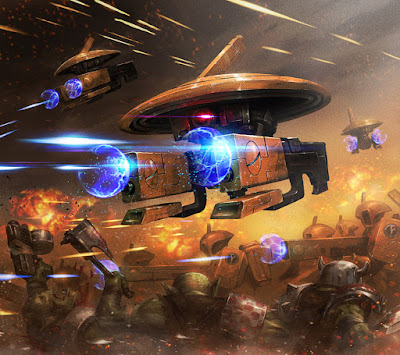 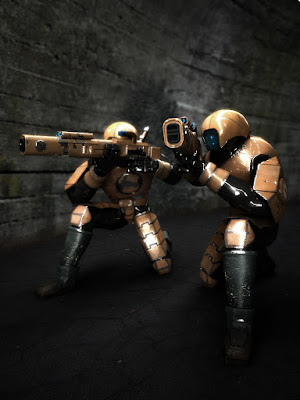 Note: Gaining experience is a double edged sword.  Models can gain extra abilities, however they will then cost more.  Even if its only a few points, 2 or 3 models that have advanced a level is the same cost of an extra model.  As the benefits of the better experience levels (outside specialists) is minor I think its best not to have higher experienced models.  having Gun Drones which can't gain experience helps stop Kill Team Bloat, where you have fewer models in a 100 point game in exchange for a fw minor abilities.

Overall I think the Gun Drones wins overall against the Fire Warrior, particularly after you've picked a Shas'ui.  Saviour protocols is huge saving Stealth suits and Pathfinder Gunners is huge, and the extra speed is very useful.  The icing on the cake is that the Gun Drones can't be affected by more than 1 negative to hit modifier. 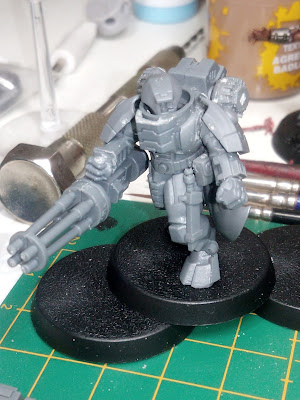 Stealth suits against Gun Drones is an interesting one. Apart from Saviour Protocols, Stealths Suits just have all the advantages:
So how should all this affect your Kill Team.  Pathfinder Gunners, and a Recon Drone are still auto includes in my eyes (leave a comment if you disagree).  Stealth Suits are still good, but after 1 or 2 you have to ask would 3 Gun Drones be better than 1 Stealth Suit.  Personally for casual and for the local GW Store campaign I'm still going to use a Fire Warrior with a DS8 Turret, a Stealth suit & a non-Gunner Pathfinder, and my current list only has 2 Gun Drones, its a nice bit of everything (except Breachers) type list.

However, definitely not for a Store Campaign or anything like that, if I was going to a super competitive event I would consider the following methodology:
This would lead to the following list

13 models (including 8 Gun drones, plus a Recon drone), costing spot on 100 points.  This list is putting out, at 18", 38 str5 shots, and 3D3 Str8, ap-1, 2 damage shots (save those command point rerolls for the overheats).  If you like Rail Rifles rather than Ion Rifles (I think they're good, but wanted to squeeze in another Gun Drone) you could lose 1 Gun Drone to have Rail Rifle rather than Ion Rifle Pathfinder Gunners, and upgrade the Pathfinder leader to a Fire Warrior leader.  If you like Stealth Suits you can easily swap the Pathfinder Leader & 2 Gun drones for Stealth Suit Leader with a markerlight and target lock.  Making both changes would still leave you with 5 Gun drones and a Recon drone.

Honestly don't take something like this to anything but a large competitive tournament.  So what do you think, are Gun Drones that good in Kill team, is this (too?) competitive ?

Are you tempted to put a few more Gun Drones in your Kill Team ?  What's been your experience with our Flying Frisbees ?

Back to painting for me, but until next time, happy gaming !!

Dipping my Toe into Shadespire

When it first came out I wasn’t too interested in Shadespire, having chosen to end my Fantasy playing days; lack of time to devout to as many games, the demise of Warhammer Fantasy Battle (not that I’d played it in its last two years) and really not liking the look of Stormcast when they first came out.

Overtime the great models that have been coming out for Age of Sigmar have pipped my interest, but the overall blockage that I didn’t enough time to plat mt existing games enough to warrant picking up AoS still stood.  That didn’t stop be picking up some models.  I picked up 2 Silver Tower Skaven Assassins to be extra Gutter Runners for my Skaven Bloodbowl team.  The Dark Elf Assassin was converted to be a second Succubus (with massive Blood Glaive), and I even picked up another Silver Tower model when in a moment I weakness (before the codex) I bought a model to be a Farseer (Doom is just too good of a psychic power). 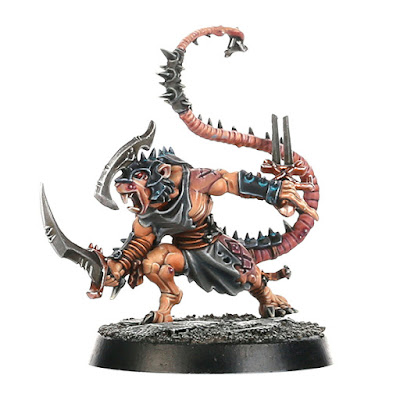 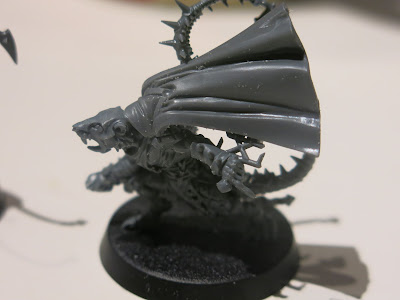 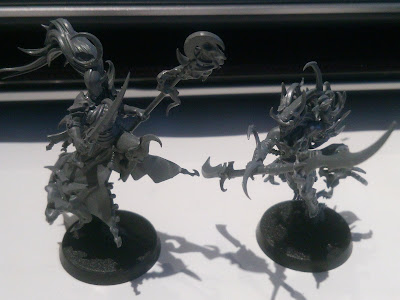 Shadespire came out, and I thought it would another splash in the pan, and then disappear; Shadow War anyone.  However as with many gaming journeys I was convinced to give it a game by two close mates who had bought it.  One mate, Mike, who had stubbornly stuck to one faction in Infinity had gone all in buying every faction, including sleeves and dice.  We had a few games and was presently surprised and thought it was a good fun game.

The different warbands appeared relatively balanced (let me know your thoughts), and I liked the idea of the deck building aspect (eg. can tweak to be more killing or objective based), but I was weary that it would turn into Magic the Gathering when buying the last few cards for a deck can prove expensive, especially as you can’t buy the cards separately at all from GW.  However I didn’t intend to go to tournaments and the mates I knew would keep thing balanced, and wouldn’t go out and buy the top builds to smash by newbie deck; well not until I starting winning 😉

So with the decision made I bought the main game.  Then I made a unusual (for me) decision about painting.  I knew I would never have the time to paint the warbands with all of my 40k, Bloodbowl & Infinity projects., so looked at buying some painted warbands.  My favourite warband so far is the Khorne Bloodhounds, so I quickly found one on ebay at a reasonable price.  I was buying a well painted warband, rather than some of the top notch painting you can find.  Then I found an ebay listing of someone selling the main boxset with both warbands painted.  I liked the unusual Stormcast paint scheme, but thought the Khorne paint scheme wasn’t that good, so I would sell them on ebay. 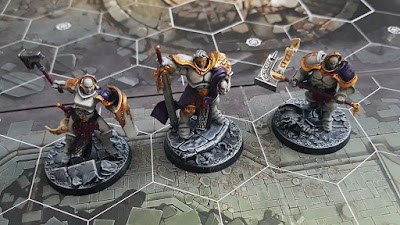 I managed to pick this auction up for less than the cost that I had bought the brand new boxset for 😊  This gave me lots of cards, and allowed to me to keep he initial starter decks in the boxset complete (to play my son), while I built decks to use against my mates. 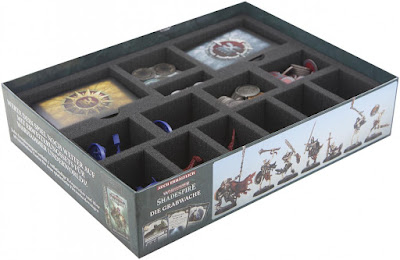 My last investment was a custom foam tray, which fitted in the box and perfectly held the warbands, tokens, dice etc.  This made it perfect to take the box and holiday, and I was able to pla a couple of games against my son in the evenings. 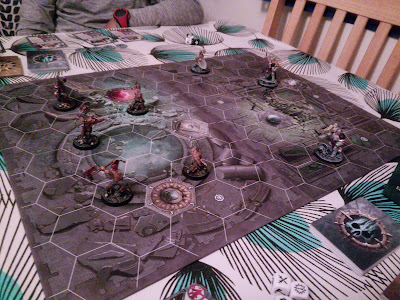 So far I’ve been having a ball playing Shadespire, and most importantly having fun with it.  Against my son’s Stormcast I’m 2-1 down (sometimes pesky Stormcast refuse to die!), I’m 3-0 up against Mike (horrendous dice in the 1st game against Undead, and then two close wins with both being equal as we headed into the last turn), and then I’m 1-0 down against my other mate’s Undead (first game playing with the short board edges touching).
I’ve recently bought the Ork warband, so my next post will be a review of my first expansion box, and I’ve got my eye on a 4th warband when the Shadespire Season 2 comes out. 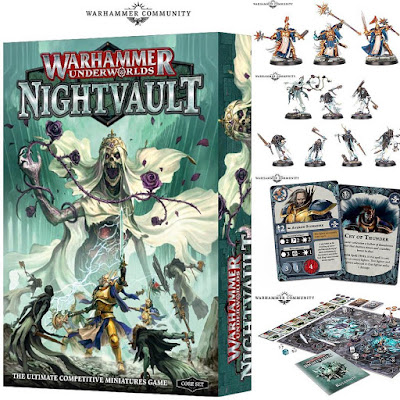 Have you been playing Shadespire ?  What do you think of it, and are you excited for Season 2 ?

PS. There are actually some ebay auctions selling the cards from the expansions individually, however in nearly all cases the best cards are sold out, but if you're not playing super competitively there are a nice way to pick up some extra cards.  If you want a lot of cards it might be worth buying an expansion and selling the models (and faction specific cards) on ebay.