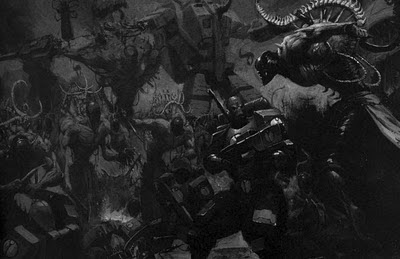 I was looking through the DE codex, when I got one of those OMG moments.

I had read discussions where Razorwing Flocks were mentioned; 5 rending attacks, 5 wounds. All well and good, but seems just ok, because I someone was under the impression that they were around twice the cost of a (space wolves) grey hunter, so you can imagine my surprise when I was looking at the hellion entry and glanced down the page and saw that the Razorwing Flocks were the cost of only one grey hunter.

My only excuse was that previously I had been concentrating on getting my Dark Eldar tournament ready asap, and therefore I wasn't looking at any units that I didn't have unless I thought it was essential to the army. Therefore I only decided to buy a 3rd ravager and convert 2 venoms.


So Why Are the Razorwings So Good

Well as stated they have 5 rending attacks (6 on the charge) and 5 wounds. Unexpected for something that has so many wounds and attacks for so little points they are still T3.

They can be combined in a unit with the basic Kyymerae (the replacement for the last codex's warp beast) which have a nice 4+ save, which gives them someone to catch any str6+ shots which would instant kill them.

They can come out of a webway portal giving a threat range of a circle with a diameter of 48" around the portal (they have the potential to asssault anything within 24" of the portal the turn they arrive).

Another thing I've noticed with beast units is that theie threat range can be underestimated by opponents, as they start out only moving 6" plus D6" run move, and then suddenly later in the game they dash 19-24" into a key combat to tip the balance.

They are beasts so can't go up buildings, a common tactic againt nob bikers is to stay in the top level of ruin, however a beast squad will only be a small part of the army so they'll be many other units that can take a unit or two hiding in a ruin.

They have low toughness and very poor armour saves, so if you don't kill most of the enemy with your high initiative attacks you will take lots of wounds back, however this is a trend accross the majority of the DE range.

If they don't charge they move no faster than a running grot, and will get left behind by the rest of the fast moving (either jump infantry, jetbikes or transported in fast vehicles) DE army. This means that they are slower over the long run than hellions. Hellions (on average fleet rolls) can charge a unit 37" away in 2 turns, for Beasts a turn 2 charge is 6" slower at (on average) 31" away (but this is still 5" away from the opponents table edge if they are set-up 12" onto the table).

To take Razorwings you have to take beast masters which seem very lack lustre for their points. They are wyches that are 2 pts more expensive. The get the beasts rule, but lose a close combat attack, plasma grenades, 4+ dodge and combat drugs. All they are good for is being being the first few models to dive in front of the enemy and die (the last beast master is needed to keep their leadership, but the rest can die).

Combine the Razorwing Flocks in with Kyymerae to reduce their weakness to instant death.

Set them up agressively with a view to getting to the enemy asap. They are slower than your transported assault troops, and you want the beasts to be in the 1st or 2nd wave, definietely not the third. DE need to hit an area at the same time to overwelm it quickly and move onto the next. If they arrive piecemeal it turns into a game of attrition and the DE can not win that kind of fight due to their low toughness and nearly non-existent armour save.

The combined unit of Razorwing Flocks and Kyymerae does not need cover too much as the Kyymerae has a 4+ inv save, plus after turn 1 the unit will probably get a cover save from the faster raiders in front of it. If possible advance near terrain in case you do want to pop in, but don't be afaid to advance round it so it doesn't slow you down.


An Example Unit and a Comparison to Hellions

An example unit is:

You could give one of the beastmasters a special close combat weapon, and you could drop either 5 Kyymerae or 2 Razorwing Flocks to get a Clawed Fiend, but the above configeration is a good base unit to get you started. It has 10 models with a 4+ inv to protect the Flocks from instant death and soak up characters attacks, while having lots of attacks.

A quick comparison against the same cost in hellions (17 hellions = 272 pts) looks good against marines in combat, assuming the ideal (and therefore extremely unlikely) scenario that both the beasts and hellions charge the marines before they take any casulties.

and the number crunching gives us the following average marine casulties: 7.8 from the beast unit vs 4.2 casulties casued by the hellions. However if the hellions get a good combat drug result, such as reroll to wound, their casulties against marines would go up, to 6.3 in the case of reroll to wound.

So in raw combat power against marines the beasts seem up have the upper hand. Against lighter troops the advantage of the beast unit would increase because they have more attacks and some are at lower str.

The extra differences make it a much more closer contest between the beastmaster unit and the hellions. The hellions would also get the nod if you include the baron (making hellions troops), however in that list I can forsee taking both hellions and beast units a valid option.

One of the two last things that makes it beasts for me, is that they are slower to start off. The Hellions will be right in front of the army with your first wave, because they can move 12" and then fleet an extra D6", so if your raiders & venoms only moved 12" to fire their weapons the hellions might be the closest thing to the enemy and a very obvious threat. The beasts on the other hand will be a few inches further back from the front of any raiders that have moved 12", this gives the enemy a hard choice; kill the closest vehicles or shoot the beast unt whichis fast has lots of attacks, that is probably benefiting from a cover save, so that any hit that if less than str5 only as a 50:50 chance of taking one wound off a five wound model which costed 15 pts.

The last point that makes me choose beasts is that they won't be many people picking Razorwing Flocks, because of the big issue (see below), which means it will give my list something different.

What models to use is the main issue. Most people agree that they should be on a 40mm base, and be like a flying swarm. So the models most people are suggesting are: 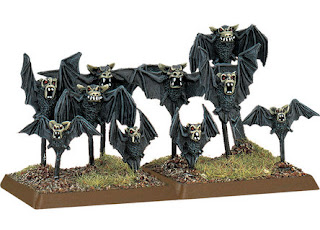 Lord of the Rings Bat Swarm 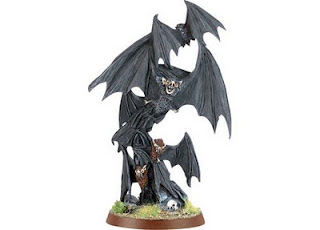 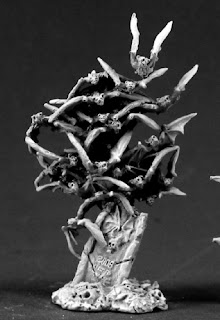 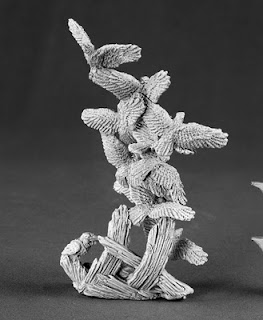 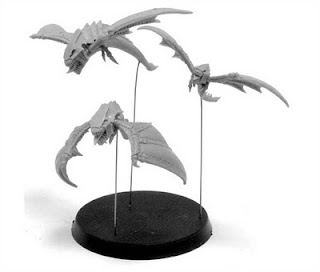 For the 6 bases I wound need (for the unit I decribed above) the Fantasy Bat Swarms would cost be £17.40 for 2 blisters (if I spread the bats lightly at 3 per base), however I really don't like the odd models.

The Lord of the Rings Bat Swarms looks much better than the Fantasy models, however they look a bit large for a swam, and finally they would cost a fortune (£49.20 for 6).

The Reaper minis, although being really nice models, seem a bit big for what the model should be. Also they have the disadvantage that I wouldn't be able to use them at any official GW events, but as I don't think I'll be going to a official GT this year (the non-GW run events are cheaper and better most of the times) it shouldn't make that much difference this year, but that could all change next year.

The Forgeworld models cost exactly double the GW ones at £34.80 for 18 models (3 a base), plus Forgeworld's expensive 12% delivery charge (another £4.18 in this case). They look much nicer than the GW models, are bigger (and therefore 3 on a base doesn't seem like I'm skimping), and are the only models that look like alien creatures.

I like the unit. They come off better in combat than hellions, but lack some of the hellion abilities (eg. combat drugs, PfP etc.). By being in the same unit as Kyymerae the weakness to instant death is mitigated. The Beast unit is also a nice mixed unit that aids it's durability. Finally the beast unit is a unit that is different to most other DE units, so it's nice to have something different from the rest of the army to add to the overall flexibility.


Next Steps for My Army

After my first read of the new codex I wrote off beast units initially because they would take alot of work to be added into my army. The old beastmaster model I had didn't have a skyboard so joined the wyches, and the warp beasts I had were the old dodgy looking ones and I only had four of them.

Giving them another look I'm realy looking forward to putting a unit together. I already have some hounds that can be the Kyymera. I've now ordered the winged rippers from forgeworld, and I'll be getting some Hellions to be beastmasters. The beast unit will be the first (non-vehicle) unit I'll be painting up for my DE in about 5 years.

I'm going to limit the DE painting only this extra unit as I want to focus on getting the Space Wolves up and running. So the painting line is now Ravager & 2 Venoms to get the DE tournament ready, then Space Wolves painting with some Beastmaster & Razorwings interjected to give me a change from time to time.