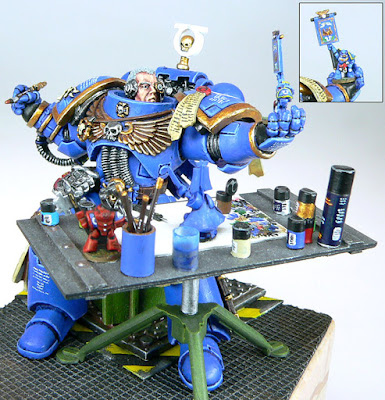 With a new edition coming up I wanted to move back to my Dark Eldar.  There were a few units I still didn't have, and I missed the army's aggressive playstyle.

Disclaimer: This post has been sitting in my draft box for way too long, so I've added some 8th Edition comments into the mix 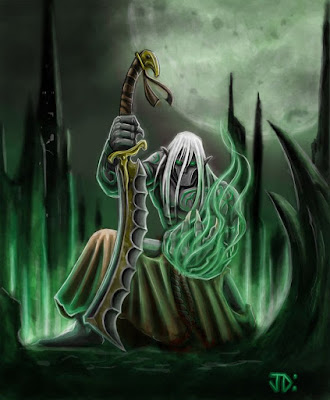 Initially I considered Mandrakes.  I remember using a unit of three wracks back in 6th edition to hold objectives for a measily 30 points.  In 7th the minimum unit of wracks went up to 5, they lost the ability to become troops, poison got worse in that you only rerolled to wound if you had higher (rather than the same) strength compared to the opponents toughness, and lastly they competed with the much improved Grotesques, plus Trueborn and Incubi in the Elites slot.

Since then I've moved away from using Incubi and only use at most one unit of Trueborn, so spending 36 points on a small harassment unit in the form of 3 Mandrakes could at least be useable.  In fact I had seen Skari (link to his youtube channel) use them very well on multiple occasions.  Skari's channel also has some great 8th edition battle reports already.

I got as far as ordering the models, but the Gathering Storm Book II game out, which gives a huge boost, even if you don't include any Eldar or Harlequin models to a Dark Eldar force, Mandrakes were not allowed in the Reborn Warhost detachment :(  I also found I was being distracted, so to focus myself I signed myself up for a tournament. 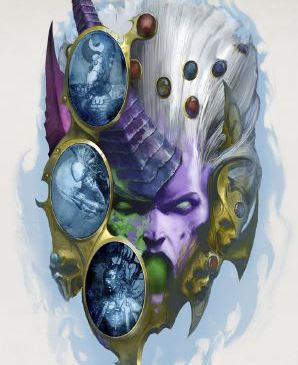 The tournament was an escalation tournament, with games at 400, 800, 1200 & 1600 points, so I decided to use the event to paint up units I didn't have.  First up was a converted Shadowseer I assembled about a year ago and undercoated grey, but then hadn't got any further:

I had initially converted it to use as a Spiritseer (one of many times I have flirted with using Eldar).  I added extra pipes to his back with extra phastasm grenade launchers from the kabalite warrior box, and the weapon was converted from a wrack blade at the bottom, a hellglaive for the middle section and a venom blade for the top.

Although I could spend more time on it, the model turned out good enough for the tournament, and I could return to it later: 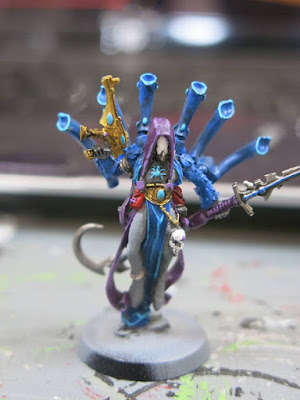 Next up were Medusa.  Although I already had some Lhameans and Sslyths I thought Medusa deepstriking on a venom could be very nasty in a Ynnari force, potentially able to take out 2 small units close together with their Str4 Ap3 flamers.  Shame their weapons don't ignore cover in 8th Edition 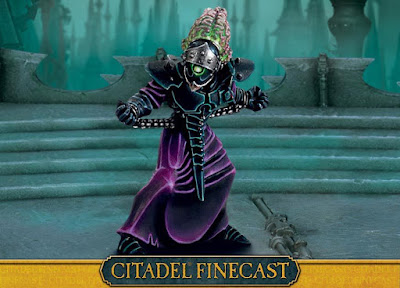 Now the issue with Medusa is that it is a single pose Finecast model, however I noticed that the kit had 2 heads, and I had a few Warhammer Shadow Warrior legs (old project that never happened), so I converted 2 using kabalite warrior torsos and medusa heads, and put a reaver jetbike head on the finecast medusa body to get 3 different medusa models: 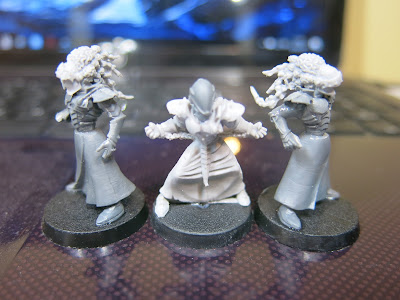 I have to say I really avoid finecast models, particularly as a lot of them are direct only which means you are playing Russian roulette as to whether you get a nice one or one with horrific amounts of flash on them (let alone mis moulded parts).  The medusa I received had lots of flash, but at least I only had the single model: 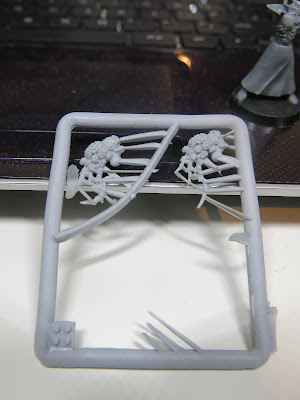 I think the required clean up was worth it as I now have a nice unit to use: 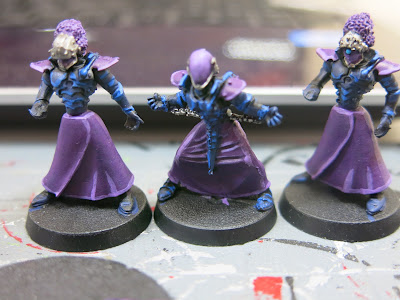 Last up was a conversion I originally was going to use as Corsair Jetbikes, so I wanted to incorporate elements of all the other eldar factions.  For the moment I would use them as Scatbikes, but with magnetised weapons they could be refitted to be used as reavers jetbikes.  I am sure the Ynnari as it is now will only be playable for a few months until 8th edition comes out.

Well I was wrong, but the latest FAQ meaning I have to use one of the Ynarri special characters to play Ynarri, and the better Dark Eldar power from pain table, will mean that I will just use an army with the Aeldari faction keyword until the Dark Eldar codex comes out which may make a pure Dark Eldar force have more benefits, and it allows me to play with my Jetbikes.

The jetbike started out as a reaver jetbike then I removed the back vertical blade, and used 2 blades from the reaver weapons to make two more diagonal blades simular to a eldar windrider.  I then added a Skyrunner canopy over the front of the jetbike to which I added spikes from the raider set (to tie the jetbikes into to my army which had similar spikes on my converted venoms).  Lastly I used scourge heads on reaver pilots. 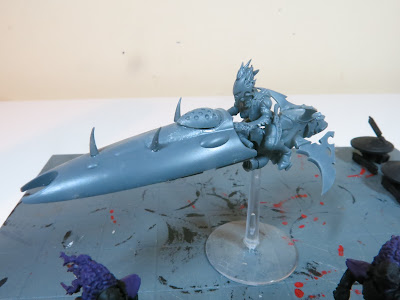 Here's the jetbikes ready for the tournament, again not finished but most of the way there: 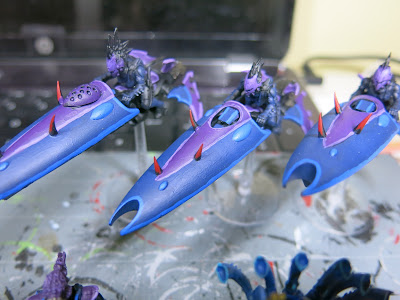 and a group shot of all the new models: 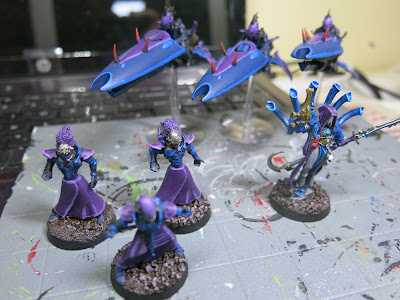 Unfortunately due to family issues I wasn't able to make the tournament, but its nice to get new models for my army.

I've managed to catch three games down my local GW.  Two were small games at 800 points, the last one was at 1200 points.  However the 1200 point game started very late so we didn't get to finish, which was a real shame as it was the only game that included the Medusa, and they stayed in reserve all game.  However I could see they had potential looking at where they could have come in and the damage the small unit could have done.

The Shadowseer has been very lacklustre so far.  Not surprising when he's a lvl 1 psyker with no other psychic support, its a bit hard to get spells off.  Another issue he has, is that he is very fragile, and I move him into my Court's raider on turn 1, so he normally in the thick of combat soon, and being the only character in the unit he is normally challenged out, and he has struggled, dying most times, against squad leaders.

Oddly enough with Furious Charge and +2 Str on his weapon he's surprising effective against non-walker vehicles, and managed to kill an unharmed Rhino on the charge by himself.  This is really useful in a Ynarri force because the Shadowseer has a high Initiative, which meant that the Court he was accompanying was allowed to charge the occupants immediately.  However while the Court killed the occupants of the rhino over 2 or 3 combat rounds the Shadowseer died to the squad champion.

Obviously this has changed in 8th edition, with vehicles and monsters needs more dedicated weapons to take them out, rather than just glancing them to death with mid strength weaponry. 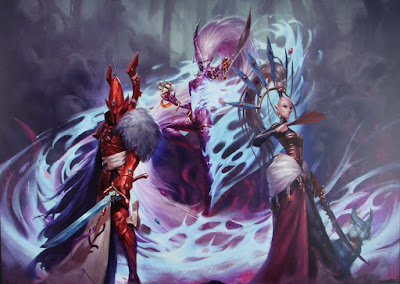 In 8th edition Beastpacks can not benefit from Strength from Death.  Ynnari works better with shooty Infantry units and Jetbikes, rather than my typical Dark Eldar list which focuses on Vehicles and beastpacks, even my Court of the Archon has been changed significantly, both becoming more expensive and individual models.  An Eldar army made of up of Reapers and Windriders would do well with Ynarri.

That's all for now, next up I'll show some more models I've painted up for a tournament I did make, before getting onto my 8th edition adventures.