TAU KX139 TA'UNAR SUPREMACY ARMOUR - and now we have rules :) 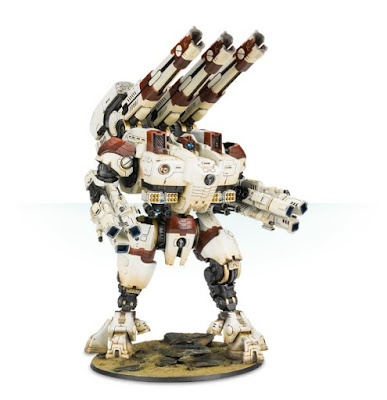 Yes, not only is this gorgeous model, the KX139 Ta’unar Supremacy Armour, now on sale, from the Forgeworld website for £250 (click here if you have a deep wallet), but the same page also has the official rules for download, which don't say they are experimental.  Click here to download them.

Checking in at a hefty 600 points, to me that seems like a reasonable amount for something so tough with so much firepower.  With T9, 2+ Save, Gargantuan Creature Feel No pain, a 5++ Invunverable save (4++ from shooting), and to top it off 10 wounds it is very tough.

When it comes to firepower it again does not disappoint.  The Pulse ordnance multi-driver (the big rail-gun looking weapons on the shoulder) has two firing modes, either a 7" D-weapon blast, or a slightly weaker 3 circle Apocalyptic Barrage that ignores cover that will clear out swaths of anything that's not in 2+ armour.  The triple barreled ion cannons fire the same as an ion cannon but with 6 shots, however instead of a large blast option it can opt to concentrate the beam and fire 3 shots Str9 Ap2 per weapon.  Each Tri-axis Ion Cannon can be switched out for a Fusion Eradicator which fires 5 fusion gun shots with slightly better range than a fusion gun.

And yet that's not all the firepower, there's still the smart missiles and burst cannons which add another 16 str5 shots, and can even be fired in overwatch at BS2. 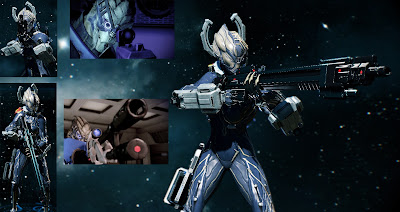 I think the base loadout with the Tri-axis Ion Cannon is best.  The Fusion eradicator are nice, but getting them within 12" to get the melta effect is much closer than this suit wants to get to other super heavies which will probably have D close combat weapons (or at least just be better in close combat),

This leaves the  KX139 Ta’unar Supremacy Armour surprising not that good at taking out other super heavy walkers given that it only has a single 1 shot D weapon, against everything else it's firepower seems ungodly bringing a nice mix of ap2 and ap3 with the two firing modes of it's 3 main weapons, and even a little extra to help thin out hordes.

Oddly enough I think this suit needs support against other super heavies.  Some Tetras for markerlights and homing beacons followed by deepstriking fusion armed crisis suits should be enough.

Also don't forget that although it only has 2 attacks in close combat it still hits at str9 ap2, and there is always stomps which could do much more damage.


So Would I Buy It 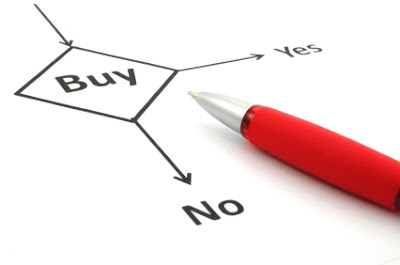 If money was no object I would have already bought the KX139, however like most people I have a lot of commitments that come before models.

With the Tau codex being released next month, I'm already looking at buying the Codex, Tactical Cards, the big Stormsurge big suit and the only midly smaller Ghostkneel Stealth suit, so for the moment I can't afford to, but as soon as I have the new codex suits painted up this is something I'd like to buy.


Would I Use It In Games 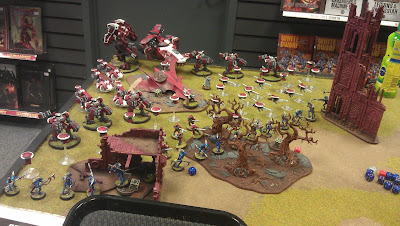 I think the suit would be great in big games, say 2500, and although you can use it as low as a 1000 point game I think it would unbalance the game and lead to less fun games.  I know GW are pushing us to use anything we want, but for anything less than a 2000 points game (or a 1750 point game where someone wanted to test their army against an expensive Lord of War) I would leave it out.

The Ta’unar Supremacy Armour is after all the cost of 3 Riptides,which is quite expensive, but to me it's nearly as tough as 3 Riptides and I would say puts out the more firepower than 3 Riptides.  So it's definitely worthwhile using it, but it's not going to make your army an auto win.  If you minimise on other expensive units and build around it to have a decent army it should do well for you.

Obviously I couldn't help pointing out a list using the units I have and here's a 2000 point list I quickly made up:

It's still a bit weak against a Knight army (with the 52 infantry models being almost useless against the Knights), and an Imperial Guard mech heavy lists would also cause problems, but the list should do fine against most opponents, and hopefully be fun to play with and against too.

Lastly you can buy the KX139 Ta’unar Supremacy Armour is parts, you can get the main body for £130, the top gun (pulse ordnance multi-driver) for £60, and each of the tri-axis ion cannon for £30 each.  Coming to a total of £250 meaning you say nothing if you buy them as a bundle.

I may use this option myself, after buying the GW stuff in Oct, I would buy the body in Nov, and ask for the weapons for xmas pressies.

It's going to be an expensive end to the year 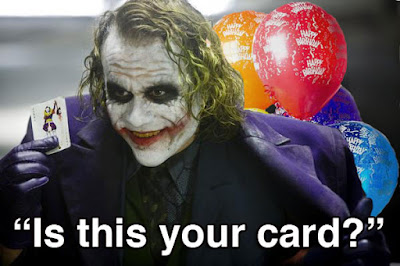 Let me know your thoughts on the Ta’unar Supremacy Armour ?  Worth it's points, do the rules and background fit the Tau fluff ?  Will you be buying one ?