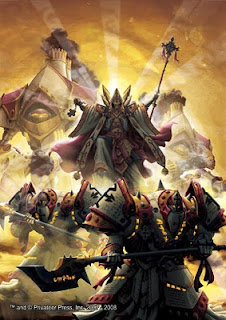 After dithering on my choice of Warmachine faction (I really like some of the Retribution models) I decided to actually start with one of the 4 main factions, and in my case it was Menoth. The models for the jacks, bastitions and errants caught my eye. I also liked the fact they have to use synergy between their unit abilities to make the best use of their army.

I was lucky in that after winning an auction on ebay for the metal starter set (plus a unit of errants) and posting for army list advice on my local club's forum, I found out that someone at my local club was selling some Menoth models, so I was able to pick up a choir, delivers, flameguard, 2 heavy jacks, 3 light jacks & the high reclaimer for £70. To finish off I won another two auctions on ebay for another crusader and 6 flameguard to finish off the unit.

My first game of Warmachine was with a 35 point Epic Kreoss list:

I was up against another Menoth list using Amon and loads of light jacks:

The game was fun, and was very bloodthirsy on both sides. My flameguard took the brunt of the initial fighting, and Amon's ability to give his jacks +1 to hit and damage for each previous hit in the turn made them very destructive, but it was bit of overkill against my infantry.

When I feated and charged in my crusaders they smashed light jacks easily, and the choir meant that on the further turns my jacks were still hitting the opponents light jacks (even with their poor MAT stat).

One nice combo I did with the flameguard was to put a +3 armour buff on them from kreoss, and trigger the UA's mini feat which game them +4 arm while they were in shield wall formations the turn before they were charged by a few of Amon's jacks

In the end Amon ran out of jacks. I think my opponent list suffered from having too many so that he couldn't give them all enough focus, while I had two heavy jacks which I could give enough focus to to ensure they wrecked which ever light jack they were attacking. I discussed the game with my opponent and he said he should have put a couple of heavy jacks in the list, as his lights lacked the strength to dent my heavy jacks enough before they were wrecked.

I wasn't too impressed with the light jacks (especially considering when it was only 1 or 2 pts more for a crusader). I also liked the abilities of the covenant, but I thought I would try using the models I had before I bought too many more models.

The following week I was against a Khador list with widowmakers (stealth snipers), supporting them was eiryss, the mercenary that throws bombs. To bring the hitting power was some troll type models with a character. So overall the army was quite small with the expensive combat troops and all the solos and characters.

I liked my crusaders so much I decided to put 3 into the list, at the expense of the repenter and the flameguard unit attachment. The final list was:

This game I had to run at the enemy being snipered by the widowmakers. Luckily Kreoss had the spell that if you killed a model in the unit you were knocked down which stopped the widowmakers moving away if they wanted to fire and stopped a character the enemy had from firing twice if he stayed still to get the aiming bonus.

However once I got accross the board the window makers died to combined melee attacks from the remaining flameguard. The enemy combat units were also outnumbered and eventually dragged down by crusaders and bastions.

This game I really lacked any shooting power and facing such a shooty force showed me that I might need to add some firepower to have a more balanced force. I also loved the bastions ability to spread damage, it can keep models in combat from dying by spreading the damage to other models further away from combat or you can just let the models in combat range die to waste the opponents attacks, in my case the front two bastions had been charged by two enemy models, so I let them both die from the first model's attacks by first spreading the damage to other other one and then letting the first one die to the second hits, meaning the other model that had charged the bastions had nothing to kill.

For games three and four I decided to drop one of the crusaders to get a min unit of delivers, and with the spare point I increased the choir to 6 models, as a few stray AOEs could easily take out most of the unit and they were essential for buffing the crusaders.

For my third game I played Merc force that spammed AOEs. My first rude awakening was when I advanced forwards ensuring that when my opponent advanced the AOE would still be out of range, only to find out in my opponents shooting phase that AOEs don't automatically miss if they are out of range like in 40k, they just scatter from the maxiumum range.

In the first couple of turns I got a bit lucky with the AOE scatter and didn't lose too many models. The match ended with one crusader smacking some infantry that was next to the other one, allowing the scond crusader to be loaded up with focus from the reclaimer and charge enemy caster and lay the smack down :)

My fourth game was against Circle, my first Hordes opponent. Nasty druids kept pulling my models forwards and backwards. Kreoss' upkeep spell was very useful knocking a few down when they killed flameguard.

The early game changing event was a beast charging my furthest forward bastion. He had an ability to make a full advance after he killed a model (ie. get away from any retribution). After checking the rules I transfered nearly all the damage to the rest of the unit, meaning the beast couldn't get away. One charge from a full focus loaded crusader with choir buff and the beast was dead.

I made a mistake this turn and before I feated and charged the crusader I charged some of the flameguard into another beast that had flamed half the deliverers, so unfortunately they didn't benefit from the feat and didn't do much damage.

Late game, I'd killed most of the infantry and 2 beasts were dead, and still had quite a sizable army left. Unfortunately I strayed to close to the action with my caster, and the druids shot him and dragged him forwards to be charged by an unwounded heavy beast. Even though he'd camped most of his focus, after the attacks I only had 5 hit points left. Counter charging with a crusader and attacking with kreoss failed to kill it.

Note that I had fogotten that Kreoss could do a special action attack that would push the beast back so I could have put models between Kreoss and the beast.

Next turn the beast did the final few hit points and I lost. Point to learn is always be careful of your caster, particularly around units that can move opponents models.

I also made a couple of more mistakes. I left the delivers too far forwards and a beast was able to move forwards and flame most of the unit killing half of them. Better positioning of them would have allowed them to make a much better impact by throwing 5" AOEs into the druids (even though they had stealth such a large AOE would have killed a few). I also left the errants on the right flank away from the action (I was thinking of the mission objective which was to control areas of the battlefield). If they had been able to be more in the action they could easily have helped Kreoss from being killed with their weaponmaster attacks. I think I should concentrate on keeping my caster safe and stopping my opponent from getting the mission objective win above trying to get the mission objective so early.

So far I've had lots of fun playing warmachine, and will definetely be trying to get more games in. Unfortunately the main group of mates I game with are not interested in starting Warmachine, but there's a campaign at my local club which I'm involved in, and a few people in other Berkshire clubs which have started up playing.

The main thing I've learnt is that Menoth is a counter attack army, due to it's slow speed. The cheap flameguard are essential to receive the first enemy attacks. However it is essential that they are not thrown away, and that they are used to ensure that the counter attack is as destructive as possible. If it's timed well and the counter attack is combined with Kreoss' feat it can be game over. However as always you must be careful not to overextend your army in the mopping up process which might put your caster at risk.

What's your thoughts on Warmachine ? Have you got a fraction and what are you thoughts on Menoth ? I've just bought a second fraction, and will be detailing my choice in a future post. What are you favorite fractions, and/or Menoth casters ?